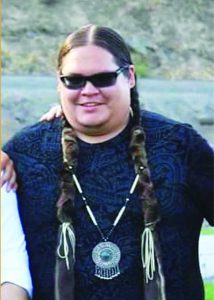 Michael Gavin “Heyoomakin” was a wonderful son, brother, friend and above all else uncle. He is survived by his father Gregory Michael Gavin and mother Shawna Shillal-Gavin. He was a proud Cayuse man and enrolled member of the Confederated Tribes of the Umatilla Indian Reservation.
He is also survived by his siblings Derek Gavin, Lee Gavin, Jill-Marie Gavin-Harvey and Michelle Tias. He has 13 nieces and nephews that will miss him dearly. He had a special relationship with each of his ten nieces and three nephews individually. He was an avid hunter and fisherman and spent all of his free time gathering meat and fish for his family and tribe.
He was a devoted congregant and youth pastor at Bethel Church of Pendleton where he led worship. His church family grieves his loss as one of their own family members. Michael was strong in his Christian faith and a strong believer in Jesus Christ. He was incredibly close with his family and took special care of his parents and Uncle Michael Ray Johnson. Since childhood he was funny, caring and very responsible. He attended Bible College in Surrey BC, Canada where he majored in music. He worked many years for the tribe at Wildhorse Resort & Casino, Yellowhawk Tribal Health Center, CTUIR and Cayuse Holdings.
His love of music will be sorely missed and the sound of his guitar will be a treasured memory for all who knew him. He loved movies, swimming and traveling. He spent many days with his siblings, sisters and brother-in-law going on trips anytime anyone would ask. He was close with his sister-in-law Malia Gavin, sister-in-law Jenna Gavin and brother-in-law Sir Christopher Harvey. He was also close with all his cousins.
Bethel Church was his second home and he devoted his life to sharing his faith with those around him. He faithfully picked up youth in the area for church services and brought them to youth group and Sunday service. His connection with the youth in our area was one of his life’s biggest impacts.
His funeral service will begin at Pendleton Pioneer Chapel with a dressing at 2 p.m. on August 11th followed by an open Denominational service at the Mission Longhouse led by his Pastor Tim Van Cleave. Michael’s last Seven will be at the Mission Longhouse at 6 a.m. on August 12th followed by a 7 a.m. burial at Homly Cemetery in Cayuse, OR. On Saturday, August 14th at 11:00 a.m. there will be a Celebration of Life service at Bethel Church, 1109 Airport Road, Pendleton. Michael will be missed by his immense group of family, friends and his very special dog Josie.