Loretta Videll Bronson – Twásaklay, 89, of Cayuse, Oregon died July 27, 2021.
Videll was born in Cayuse Oregon on August 10th, 1931, to Elizabeth “Lizzie” Woods and Richard Burke Sr. When she was a young girl, about 5-years-old, her father gave her a retired racehorse and she learned to ride. Horses and racing were an integral part of her life as she became an accomplished rider, owner, and champion for horsemanship. Videll married her husband Virgil of 63 years in 1955 after they met at a wild horse round up. They raised their five boys: Ronald, Richard, Wendell, Vern, Bryson, and daughter Lawanda at their ranch in Cayuse, Oregon. They raised their children to love horses, just the way they did, and the family participated in horse races across the Western United States. Videll loved traveling to California and racing at counties fairs like Pomona and Ferndale. In 1993, Videll’s favorite horse, Good Courage, won the Harvest Handicap taking home the $30,000 purse. For more than 50 years, the family participated in the Pendleton Round-Up, winning the chief’s race, squaw race, Indian relay, and baton relay.
Videll’s legacy lives on through her early leadership in the successes of the Confederated Tribes of the Umatilla Indian Reservation (CTUIR). In addition to serving on the Board of Trustees, Videll played a key role in founding the Columbia Inter-Tribal Fish Commission (CRITFC) and establishing Yellowhawk Tribal Health Center where she was one of Yellowhawk’s first Community Health Representatives conducting home health visits to Tribal members. She also led efforts to secure funding for vocational and higher education programs for tribal members and in her role as an alcohol & drug counselor, Videll started the BAAD – Basketball Against Alcohol and Drugs – Basketball Tournament attracting youth basketball teams from across the Pacific Northwest and beyond for over 30 years. Videll always opened her home, especially to her horse track and basketball families. She was known for her good cooking, and when family or friends came to visit, she would always whip them up a homemade meal.
Later in life, Videll was an avid bingo player, and she was always ready to play. She enjoyed visiting her bingo partners, and often traveled around the northwest with her daughter Verna to play in big games. She loved to garden and growing tomatoes and zucchini were her favorite. Videll was a lover of reading and always had a stack of books to share. You could find Videll in the stands at the gym attending basketball games, or other sports to show her love and support. She especially enjoyed cheering on her grandchildren and great grandchildren in big games at the gym or watching them laugh and play a small game of baseball in her backyard.
Videll will always be known for her bright smile and her contagious laugh. She was a strong woman, who stuck up for what she believed in. She loved her family and her friends and her people. Videll, is survived by her daughters Verna Patrick and Lawanda Bronson of Pendleton, Oregon, and her many grandchildren and great-grandchildren. Videll was preceded in her death by her brothers Richard Burke Jr., Edgar Saluskin, Antone Tappo, Charles Tappo and sister Ernestine Watters; her sons Wendell Bronson, Bryson Bronson, Ronald Bronson, Vern Bronson and Richard Bronson, her daughter, Violet (Burke) McGuire, son-in-law Brian McGuire, and her husband Virgil Bronson.
Videll’s Washat services were held Wednesday, July 28, 2021, at her family ranch in Cayuse, Oregon. The Final Seven were held at the ranch in Cayuse on Thursday, July 29, 2021, followed by burial at Agency cemetery. 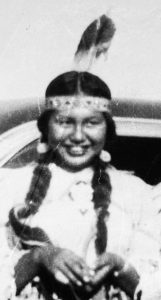