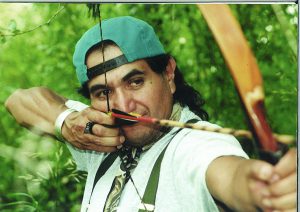 Peter Alexander was born January 12, 1953 at St. Anthony’s Hospital in Pendleton to Lillian Anita (Farrow) and Uriah Alexander. He passed away peacefully at home on July 28, 2021 at 68 years of age. He was the youngest of 5 children.
Randy attended Pendleton schools until 1970. That year he met his future wife Hilda Halfmoon and they were married November 1, 1973. They had two daughters Sunni Dawn and Brandee Marie. Sunni passed away but left him two grandchildren, LaRiah Marie and Nicolas Pearce.Brandee died in infancy. Randy and Hilda have been raising the grandkids for the past 10 years. They both were his pride and joy.
Randy worked for USFS retiring with 20 years service. He fought fires and later worked on fish habitat even receiving a commendation from US Department of Agriculture for his work onThomas Creek. After forest service he worked for a time with Bureau of Indian Affairs and then moved from there to Confederated Tribes of the Umatilla Indian Reservation as a wildlife technician.
Randy was a talented artist, leather crafter, photographer and archer. He played slow pitch for several years also. He enjoyed the outdoors, hunting and fishing. Randy loved to spend time at the casino and made many new short term friends each time he went. He also made friends at Davita dialysis center with both other patients and staff. He was the medicine man for several years in the Happy Canyon Show.
Randy had a dry witty sense of humor and if he tormented you, he loved you. If he gave you the silent treatment, not so much. He was known as Hawk by lifelong friends and Uncle Beer by his nieces and nephews. He was PaPa or Pops to his grandkids.
He is survived by his wife and grandkids at home. Brother Stan Alexander, sisters Marie (Butch) Dick and Barbara Guerrero, numerous nieces and nephews and Alexander, Farrow and Hall cousins. And great grand pups Pete, Jake, Nicky and Angel. He is preceded in death by his parents, both daughters and brother Les Alexander.
Final viewing was August 2nd at 10a.m. at Burns Mortuary. Immediately followed by burial at Agency Cemetery.
Burns Mortuary of Pendleton is in charge of arrangements. Sign the online guestbook at www.burnsmortuary.com