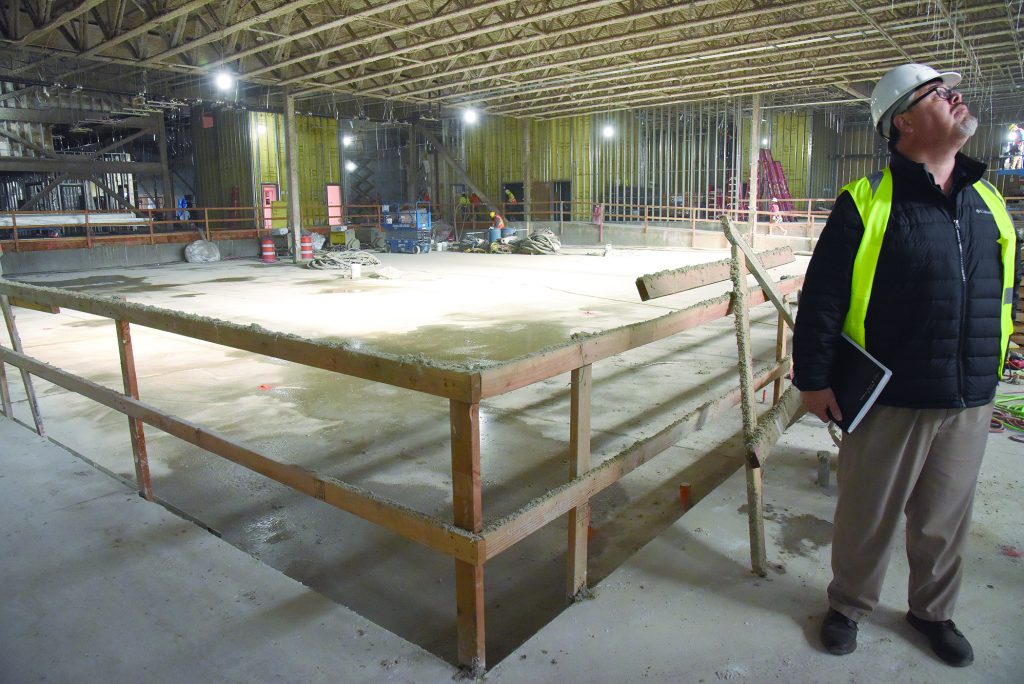 Al Tovey, General Manager of Wildhorse Casino, checks out the construction inside Whispering Aspen Lanes, the newest addition at Wildhorse Resort. The facility will feature 16 lanes for general bowling plus another eight “boutique” lanes that can be rented for parties and other occasions. A full bar, a 120-seat open-air food court, and a 35-game state-of-the-art arcade will also be under the roof of the new building. Not-so-distant plans include the addition of a second hotel tower. Wildhorse is celebrating its 25th anniversary in March with its big fireworks show scheduled for Saturday, March 14. Photo Credit: CUJ Photo/Phinney
By the CUJ
MISSION – Inside it’s still a huge expanse of hanging cable, steel beams and concrete, but it’s not hard to imagine the shiny hardwood lanes, the clatter of pins scattering at the impact of a bowling ball, or the rat-a-tat-tat of the firing-range arcade games.
Or maybe you can smell Brigham’s Fish and Chips or Moe Pho’s noodles. Perhaps your taste buds prefer the ice cream or a mocha at the sweet shop in the food court.
Still a full six months away, the 48,302 square-foot addition at Wildhorse Resort has created a new footprint on the southwest edge of the casino on the Umatilla Indian Reservation. Resort guests will enter through a new set of doors into a massive hallway that takes them into an open-air 120-seat food court where they can decide whether to go right to Whispering Aspen Bowling Lanes, head straight to the arcade, or turn left to the cinema.
“We’re hoping to be done before Round-Up,” said Al Tovey, Wildhorse Casino General Manager. “It’s going to be an exciting place to come.”
Inside the main part of the structure is room for 16 lanes of bowling. Nearby is another eight “boutique” lanes that can be rented for special events – birthday parties and other such occasions.
“There will be enough lanes to handle our resort guests and people who come off the street to bowl,” Tovey said. “We think it will meet all expectations.”
Tovey said Wildhorse expects to have league bowling and he’s hoping tribal and local teams will form for regular competition. He said, too, that Whispering Aspen could host state and regional amateur events in the future.
But the bowling alley isn’t the only thing under this new roof at the resort owned and operated by the Confederated Tribes of the Umatilla Indian Reservation.
“This isn’t going to be your mom and pop bowling alley,” Tovey said, stealing the line from Bruce Mecham, the Food and Beverage Director at Wildhorse, as they walked around inside the building while workers on scissor-lifts sized up metal girders.
“You add in the other casino amenities and Wildhorse offers a pretty big package,” Tovey said.
The resort already has its casino that includes 5 restaurants, 8 conference rooms, entertainment venues, and a gift shop, plus a 300-room hotel tower with a swimming pool, as well as an RV Park and an 18-hole championship golf course. A mile to the east is Tamastslikt Cultural Institute, the Tribes’ museum. Further expansion, including another hotel tower, is on the drawing board.
Tovey expects young and old to have fun in the arcade.
It will be a state-of-the-art games gallery with products from Betson Enterprises, a four-generation industry leader headquartered in Carlstadt, New Jersey.
There will be a total of 35 games that offer positions for 53 players, according to Mecham. Players can win immediate prizes on five of the games and 21 games will pay out in points that can be used to purchase prizes at a nearby redemption store.
There will be no quarters, no tokens, no tickets to play these games. Instead, players will “load” money onto a card, much like the player’s card gamblers use on the casino floor.
In addition to the new stuff, Tovey said, the concessions and ticket counter will be expanded at the cinema. Also to be enlarged is the Child Event Center (CEC), which has been serving resort customers and Wildhorse employees for about 20 years. Children from potty-trained age to 12 years can spend time in the CEC for an hourly rate. There they get a meal and soda, plus entertainment including game time on Wi, X-box, and PlayStation or movies.
“Wildhorse is becoming a real entertainment center, definitely for Eastern Oregon,” Tovey said. “For our area, this is where to come.”