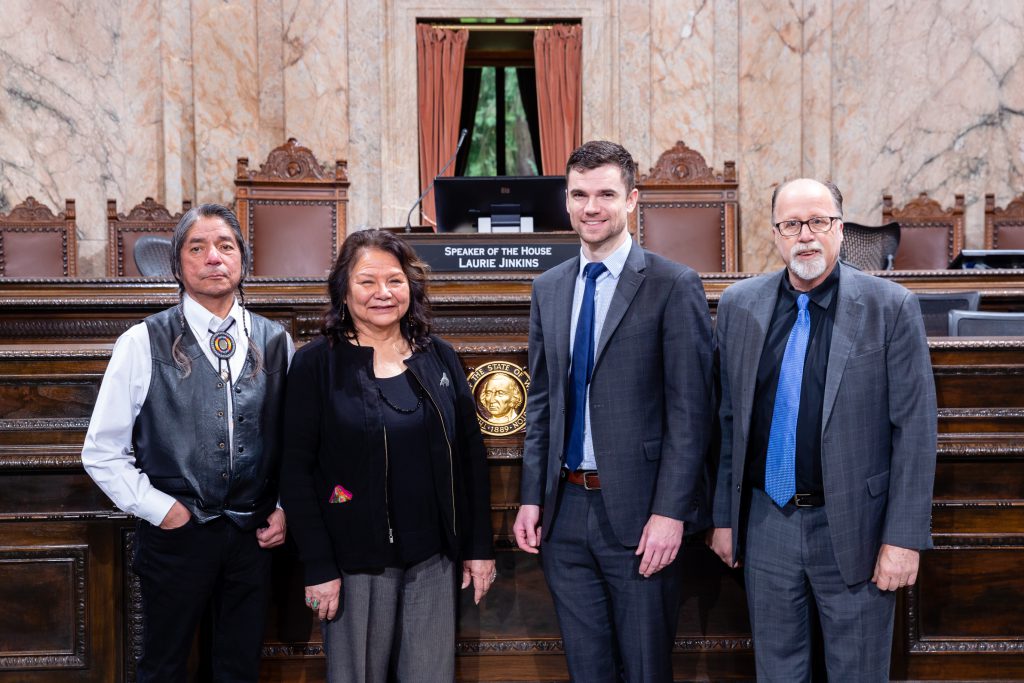 OLYMPIA – Longhouse leader Armand Minthorn delivered the invocation to start the floor session for the Washington State House of Representatives at the capitol in Olympia Feb. 26.

Minthorn, who also is a member of the Board of Trustees (BOT) for the Confederated Tribes of the Umatilla Indian Reservation (CTUIR), and Kat Brigham, BOT Chair, were guests of Washington state Reps. Bill Jenkin, R-Prosser, and Skyler Rude, R-Walla Walla.

Minthorn used the Washat bell and spoke in his Umatilla language and addressed the body for several minutes. Changing to English, he shared his thoughts on working together to a positive purpose. Then, asking all to “pray in your own way,” he sang a prayerful song that filled the chamber. The bell rang again to bring the prayer to an end.
Over the course of meetings during the day with legislators, Minthorn was thanked for the start of the day. Several members said it was the best prayer of the session, and man said they could “feel the spirit of the Creator” fill the room as he spoke and sang.

After the invocation, Brigham and Minthorn were invited into the House Republican Caucus where they were greeted with a standing ovation. They were introduced by 16th District legislators Jenkin and Rude. Brigham shared information about the CTUIR, including news of the new fish hatchery under construction on the Walla Walla River. As Minthorn and Brigham left the room, the House Republicans again stood and applauded.

Feb. 26 also happened to be Rep. Debra Lekanoff’s birthday. The Democrat from Bow thanked Minthorn for grounding her day in prayer that sang to her heart.
“Best birthday present ever,” she said.