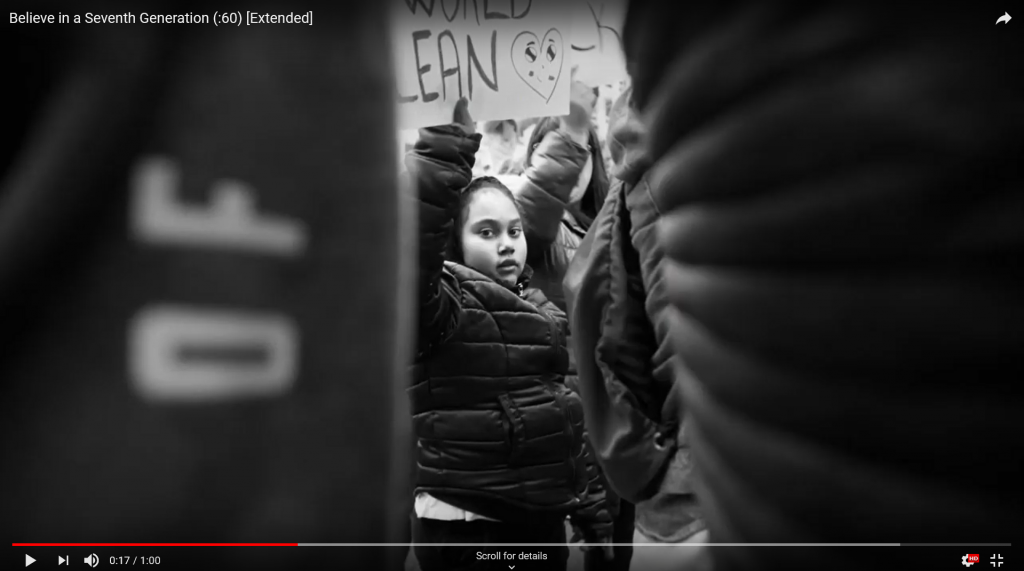 Daijha Roper, enrolled CTUIR tribal member, appears in a national TV commercial for the brand Seventh Generation. The photo was taken in December when she and her mother attended a Youth Climate Strike in Portland. It first aired Feb. 4, immediately after the State of the Union address. Photo Credit: CUJ Photo/Casey Brown
By Casey Brown of the CUJ
After the State of the Union address on Feb. 4, one of the first faces television audiences saw was Daijha Louise Roper, an enrolled member of the Confederated Tribes of the Umatilla Indian Reservation.
The annual address from the President of the United States had 37.2 million viewers on 12 television networks, and anyone who stayed tuned in to the first commercial saw a commercial for the brand Seventh Generation. They make cleaning and household products with a focus on sustainability and equality.
It all started when Daijha and her mother, Dawn Swan, went to Portland in December to attend the Youth Climate Strike. A photographer from Opinonated, a creative agency in Portland, was collecting material for the commercial.
“I wanted to take my daughter there to give her a look at what’s happening in the world and what the younger generation is doing all over the world, doing these strikes and trying to get politicians to make changes,” she said.
They also weren’t expecting such a large crowd at the climate strike.
“Mommy said there was only going to be 76 people,” Daijha said.
“According to the Facebook event page,” Swan said. “But when we showed up to Shemanski Park, there were a couple thousand people, all with signs.”
Daijha was paid for her appearance, which will make a local impact and shape Daijha’s future.
With her mother’s guidance, Daijha is considering using the money to start a business. Profits earned by selling t-shirts, or whatever form the business make take, will be put toward local youth’s fight against climate change, according to Dawn.
During the 60-second commercial titled “Believe in a Seventh Generation,” a voiceover of Franklin Delano Roosevelt from nearly 80 years ago plays while images of youth from the climate change movement appear.
The audio is a clip from FDR’s 1943 State of the Union address when the United States was in the grips of the Second World War.
The children and teens are holding signs, and some of them read, “THERE IS NO PLANET B,” “QUEREMOS UN FUTURO,” which is Spanish for “We want a future,” and “THE YOUTH HAVE SPOKEN. ARE YOU LISTENING?”
“The people have now gathered their strength. They are moving forward in their might and power—and no force, no combination of forces, no trickery, deceit, or violence, can stop them now. They see before them the hope of the world—a decent, secure, peaceful life for men everywhere.”
The black and white images continue to scroll across the screen until a new message appears against a white background: “What if we were meant to be the next greatest generation.”
Video of a black and white scene in Times Square, New Year appears in which Navy men and civilians celebrate the end of World War II. That scene is replaced with color footage of modern-day climate change youth gathered in large numbers.
New text appears against a white background before the commercial ends that reads, “Climate Change is our problem to solve. The solution will be our legacy.”
Dawn thinks the ad will have a positive effect for the movement she introduced her daughter to.
“It was a powerful ad, and they were trying to send a strong message. They knew what Trump was going to be talking about [during the State of the Union address], so they really wanted to push awareness on climate change, so that was their way of doing that.”