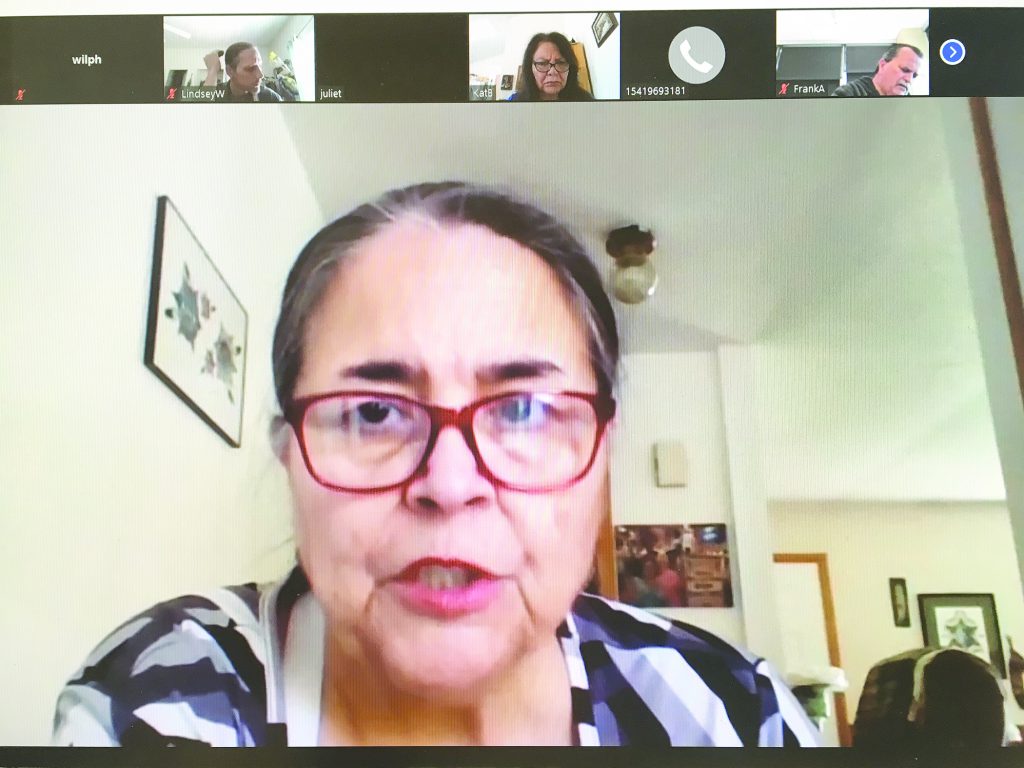 BOT Secretary Sally Kosey addresses fellow Board of Trustees members during a Zoom video-conference in April.

MISSION – Besides the challenges of making tribal government work from the isolation of their homes, leaders on the Umatilla Indian Reservation are feeling a little lonely like everybody else. They miss their friends and families.

For General Council Chair Lindsey X. Watchman, that means “not being able to hug family members long and tightly, to see smiles and hear the laughter of our extended families at a community event.”

Board of Trustees Chair Kat Brigham just misses the people.

But paramount to tribal leaders and staff is making tribal government work as efficiently as possible using computers and phones from home and taking advantage of internet services that allow groups of individuals to hold video-conference meetings.

There was a learning curve for some members of the Board of Trustees (BOT), but they’ve had lots of practice now with multiple work sessions and weekly Monday meetings for the last two months. During one meeting, the washer could be heard running in the background at Brigham’s house.

“There’s been a time or two when I’ve been on mute and I say something and wonder ‘Why aren’t they listening to me?” Brigham said.

Another time, early on in the process, she was in a conference call with other northwest tribal leaders. The meeting was to start at 9 so she called in at 8:30 not realizing that she could be seen before showering or brushing her hair.

“You have to get up and get ready to go to work,” Brigham said.

Brigham has relied on Executive Administrative Assistant Dana Quaempts and Boots Pond, the youngest BOT member, to walk her through the Internet jungle. Quaempts has been the host and administrator for all the Board’s Zoom video-conference meetings.

At one point she remembers not being able to figure out what Vice Chair Jeremy Wolf was trying to explain.

General Council meetings have been cancelled in March and April because of CTUIR social distancing rules that won’t allow gatherings of more than 10 people.
But that hasn’t been all bad, Watchman said.

“This challenge provides your GC officers an opportuning to think out of the boardroom and to develop new ways to communicate with the people,” Watchman said in an e-mail.
To that end, he said, GC officers are meeting with Tribal staff to “determine methods to engage tribal members through virtual online meeting.”

General Council Vice Chair Shawna Gavin has been a proponent of social media as a communication tool and is pleased that a Facebook page has been established.
“It’s been my dream to have a virtual communication available to us such as we may have in the upcoming GC meetings,” Gavin said in an e-mail. “I’ve long asked for and been awaiting an opportunity for GC members from Portland, Oklahoma, Florida, Colorado to be able to click the link and call in.”

Gavin is familiar with Zoom and other types of video-conference meeting platforms.

“Maybe it’s more of an urban process that we’ve been used to, but it’s nice to be able to meet whether we can gather or not,” she said, noting that the Northwest Portland Area Indian Health Board is planning its quarterly board meeting on Zoom in late May or early June.

Watchman said it didn’t take long for BOT members and CTUIR staff to become familiar with virtual meetings, even though many had not been exposed to Zoom.
“We’ve gotten over that learning curve and are nearing return to full business as usual,” he said in late April.

Watchman he thinks the BOT is doing a good job in spite of its inability to meet in person.

“The BOT is doing an absolutely wonderful job of trying to take care of every Tribal member on and off the Rez,” he said. “I applaud my fellow trustees and all our hard-working staff.”
And the work won’t end as long as there is no vaccine.

“No one knows the course this virus will take,” he said. “But we do know whatever the course, we have to protect our people’s lives and livelihoods.”

Watchman has been a strong advocate for providing cash to Tribal members during the pandemic.

He said the Tribes should take care of urgent needs now.

“Creator will have ways to take care of future needs, in the future,” Watchman said. “I’m not concerned with how much it costs us to take care of every emergency need for every tribal member. That is why we earned it and save it up to this point. To me, savings is a rainy day fund and it is certainly raining on the Nixyaawii Nation. We have the capacity to take care of ourselves in the future, as soon as our enterprises re-open.”

Brigham is mindful of that very situation.

“We’re all going to hurt, not just this tribe. Every tribe that is dependent on a casino. That’s our tax base, where we get our funding,” she said. “When our casino is gone our funding is gone. We’re all going to figure out what’s best for our future. It’s frustrating because we don’t know when it’s going to re-open.”

Brigham was the first woman elected BOT Chair for the CTUIR last November and took office in December. Within five months she’s been hit by a catastrophic flood and then COVID-19.
If she’d have known then what she knows now, she still would have wanted the job, she said.

“Because I care about this Tribe and this community,” Brigham said, “although there are times when I’m thinking, ‘What are you doing?’ I’m glad we have a good Board and good staff helping us through this.”

Ted Wright, CTUIR Executive Director, said working from home is challenging because there are distractions and it’s difficult to stay connected to all the work and people doing the work.

“Plus, it’s just mentally and emotionally draining to be alone and so far outside the norm,” Wright said. “But we know are maintaining productivity because all of the work that can be done is getting done. And in those cases where the work can’t be done or the employees are vulnerable and can’t work, we have to accept that there will be a decline in productivity, which is temporary. We will find ways to make up for lost time, as the agencies and entities we work with also get back on track.”