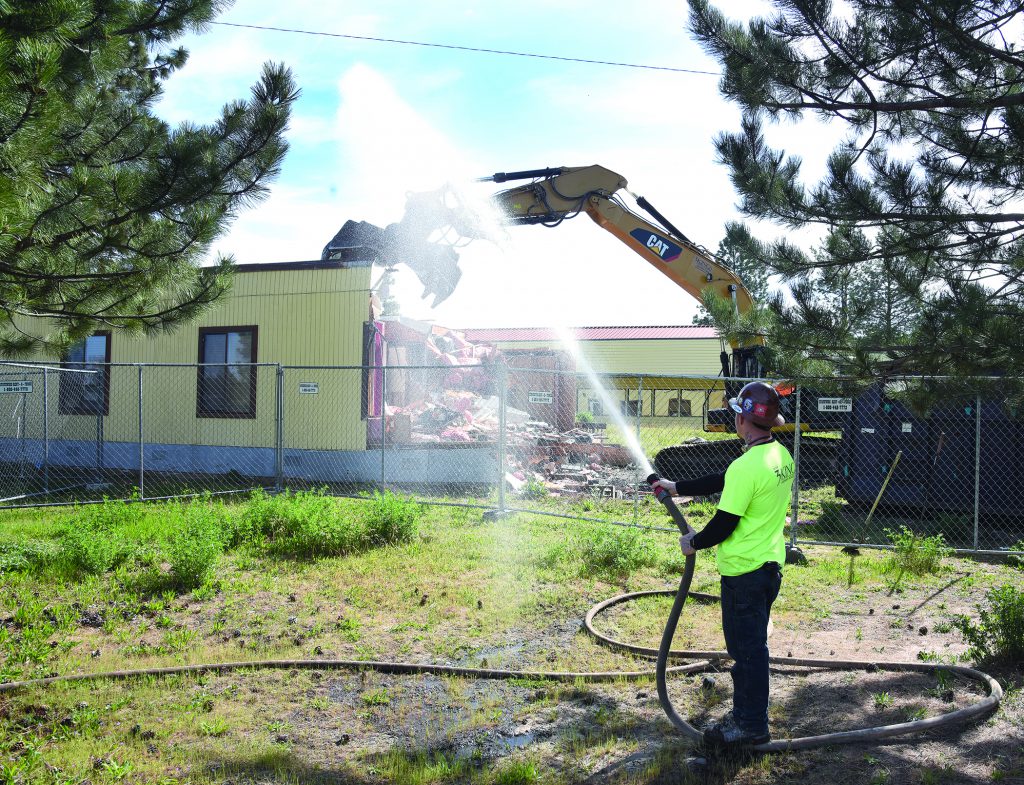 Wes Leers of Portland, who works for 3 Kings Environmental from Battle Ground, Washington, sprays water on the former accounting office for Yellowhawk Tribal Health Center. That building and several more, including the old clinic and Cay-Uma-Wa Education facility, are being razed over the next eight weeks. That will leave the July Grounds mostly empty except for the Community Center, the Longhouse and a couple of other smaller buildings.
By the CUJ
MISSION – Demolition work is beginning at the July Grounds on the Umatilla Indian Reservation. Heavy equipment has moved in to tear down the Cay-Uma-Wa Education Center, the old Yellowhawk Tribal Health Center, the former Nixyaawii Community School, and the old Tribal Police station.
About the only buildings left at the July Grounds will be the Community Center, which includes the gymnasium, plus the Longhouse and a modular used as a daycare facility.
Once buildings are razed, according to J.D. Tovey, Planning Department Director for the Confederated Tribes, work will continue with architects to develop “community-driven options” for what will be done with the property in the future. A July Grounds renovation was planned three years ago as the third part of the Education Facility Development. The first two phases were the renovation of the Community Center gym and construction of the new Nixyaawii Education Center, which was built just west of the new Yellowhawk Tribal Health Center.
The buildings in the July Grounds became vacant as departments and programs began moving west to the Nixyaawii Governance Center complex. First the Tribal Police moved to its own building, then Yellowhawk transferred to its new site, followed by Cay-Uma-Wa and Nixyaawii Community Center to the new education center.A resolution passed by the Board of Trustees in November of 2017 approved the Tribal Education Facility, the community gym renovation and demolition of Cay-Uma-Wa.
That resolution did not initially include demolition of Yellowhawk Tribal Health Center and over the years many groups and programs have indicated an interest in using the facility. The list of suggested possibilities has ranged from a new senior center or a veterans home to a vocational training facility or transitional housing for recovering substance abusers.
3 Kings Environmental from Battle Ground, Washington, was the successful bidder to demolish not only Cay-Uma-Wa, the old police station, and an old Yellowhawk accounting modular, but also the Nixyaawii Community School and the old Yellowhawk Tribal Health Center, which were added as alternatives to the bid request.
The BOT reviewed the budget along with construction documents for the July Grounds abatement and demolition project at a work session April 9 and passed a resolution approving the project on April 27.
Tovey said the old Yellowhawk building was added to the demolition mix based on a number of factors, which included the current condition of the building, the cost/benefit of renovation, availability of functions or programs that could inhabit the space, existing issues with infrastructure, and a desire to alleviate seasonal flooding that often occurs in that area.
Perhaps the biggest issue that came up repeatedly during discussions about potential use was the cost for operation and maintenance of the building. Whenever one program or another indicated an interest in using the building, the idea was quickly dismissed when it was determined there was no money budgeted to pay for the buildings’ upkeep.
“A number of programs expressed interest in the building, or small portions of the building,” Tovey said in an email. “The cost for individual programs or entities to help offset operation and maintenance made it infeasible for them. Especially for programs that are located in the NGC building.”
Demolition work is expected to last in July.