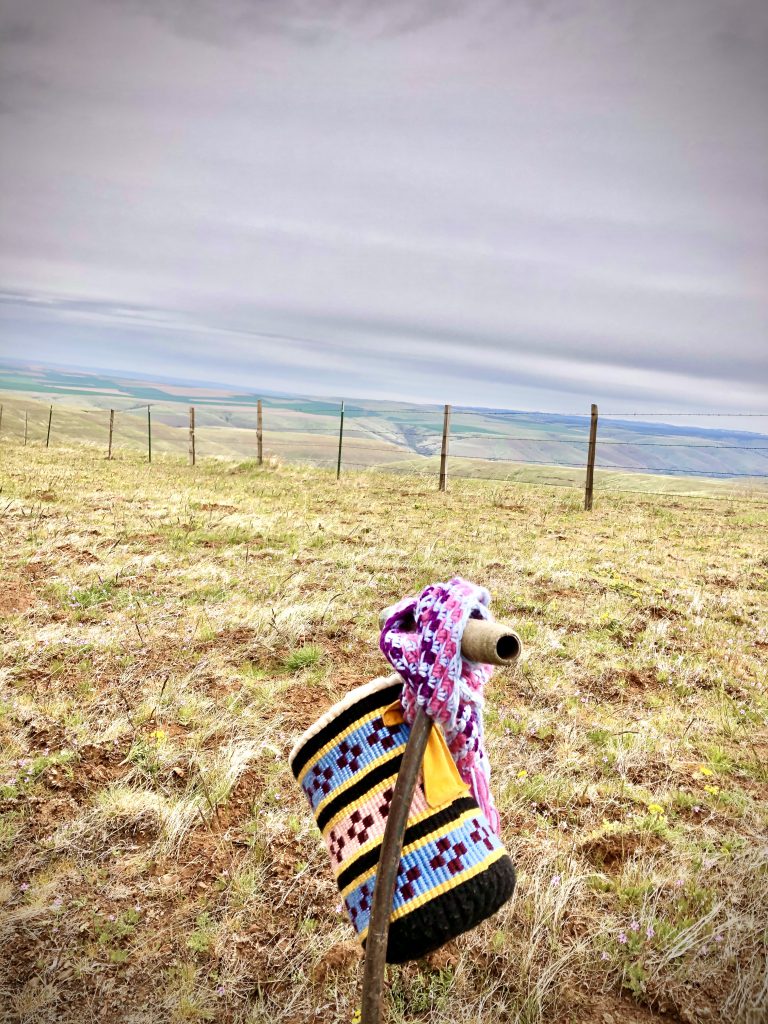 Linda Sampson took these photos during an April root gathering expedition. The Sampson family had to cancel their annual Mother’s Day Feast, but plans to get together at a later date to celebrate the return of the First Foods.

MISSION – The Root Feast on the Umatilla Indian Reservation, one of the last on the spring Longhouse calendar among Northwest tribes, has been postponed – not cancelled – because of COVID-19.

“It’s kind of sad that we can’t, but also with the virus it’s understandable,” said Linda Jones, the head cook and root gatherer of the Confederated Tribes. “We don’t want to catch something from somebody coming to visit.”

In late April, Jones led a contingent of ladies and girls – traveling in small groups with a social distancing protocol – on two digging expeditions south and west of Pilot Rock.
Other families have started gathering bitterroot (pyaxi) and cous (xwas) at their own favorite locations.

The Root Feast here always draws a big crowd from other reservations around the Northwest because it is one of the final celebrations – and because this area is known for its plentiful and desirable cous.

“They’d come out and bring stuff. That’s what they were doing. Trading her shawls, blankets, material. They’d want cous. She had a stash. She’d smile and fill a bag up and they’d be all happy,” Jones recalled.

Armand Minthorn, a Longhouse religious leader, told his fellow members of the Board of Trustees on April 22 that Tribal women have agreed that because of the virus the feast will not take place as planned.

“What they decided is that the ladies will go out and gather and bring the roots back and disperse them out to their nieces and granddaughters to peel them, then freeze them and when the times are right and we get back to normal lifeways then we can have a feast,” Minthorn told the BOT at a work session. “That’s what we’re going to do this year for Root Feast.”
BOT Treasurer Sandy Sampson announced then that her family was cancelling their annual Mother’s Day (May 10) Feast.

And BOT Vice Chair Jeremy Wolf said the Children’s Feast, which last year was held in tandem with the Salmon Feast, was also being cancelled.

BOT members discussed the need to encourage Tribal members, especially youngsters, to continue to practice traditions and cultures, albeit in small family units, and to “save roots for grandma” and “learn the songs.”

Jones noted that just because COVID-19 stopped the Root Feast doesn’t mean it stopped the roots.

“The foods aren’t going to wait and if we don’t dig we’ll be without for one whole year,” Jones said.

Cous is bursting yellow right now, but Jones is focusing first on bitterroot.

“It’s one of the first foods and it doesn’t last through May,” she said. “It’s time here is very short before it flowers and goes to seed.”

Cous is next and the ladies “need enough to put that up for a whole year, for our feast to last until next year in May or April,” not to mention for sharing and trading.