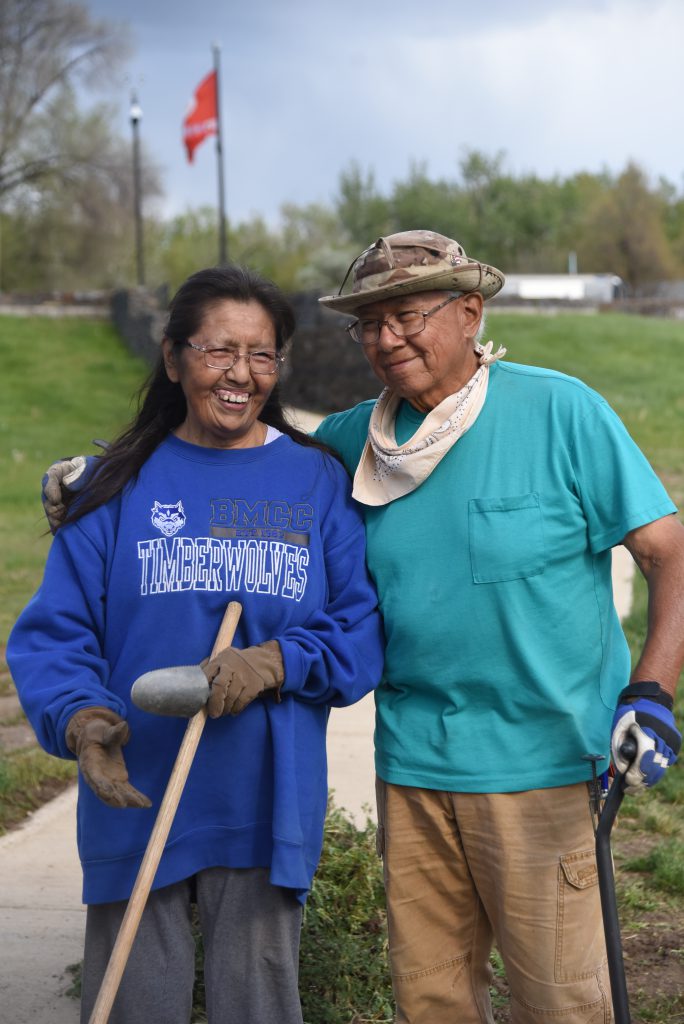 Brenda and Gail Shippentower spent two days pulling weeds and removing puncture vine from the Nixyáawii Veterans Memorial to get it ready for Memorial Day on May 25.

As Gail and Brenda Shippentower of Mission pulled weeds and swept sidewalks in the July Grounds, they didn’t want anyone to know what they were up to.

They were getting the Nicht-Ya-Wi Warriors Memorial ready for Memorial Day.

“It is almost Memorial Day, so we’ve got to clean it up for the guys,” Brenda said.

Gail was pulling puncture vine that he says is not native to the reservation lands.

“When I was a kid we never had this problem, and it just grew, grew, grew, and got out of hand,” Gail said. “They were carried here by boxcars” when the railroad was put in.
“It’s hard on animals. And people too, if they are barefoot,” he said.

The names of their family members are listed in the memorial, which was constructed in 1996.

Many of the Shippentowers are Gail’s relatives. His cousin Warren Williams is named. Brenda is related to Viola Penney Wocastsie.

“Vi is one of the few women veterans in there,” she said.

As they were cleaning, some out-of-towners visited the memorial.

“Someone was walking, and I told them, ‘It is embarrassing that we have a memorial for our guys, but no one cleans it.’”

The Memorial sees the most activity during the Fourth of July parade and during some community events in the July Grounds.

Brenda and Gail keep an eye on it year-round, not just during Memorial Day and Fourth of July.

Gail said they aren’t sure what condition it will be in when Memorial Day does come around because some “little hoodlums” “may be messing with it by tomorrow.” He said that someone, or some people, has been trying to pry rocks out.

As they loaded up their pick-up truck with buckets of puncture vine, Gail said that puncture vine is difficult to get rid of.

Brenda said the ball fields in the July Grounds are next. She’s got her eyes on the puncture vine over there, and Gail’s got his eyes on the yellow Russian Thistle weed.