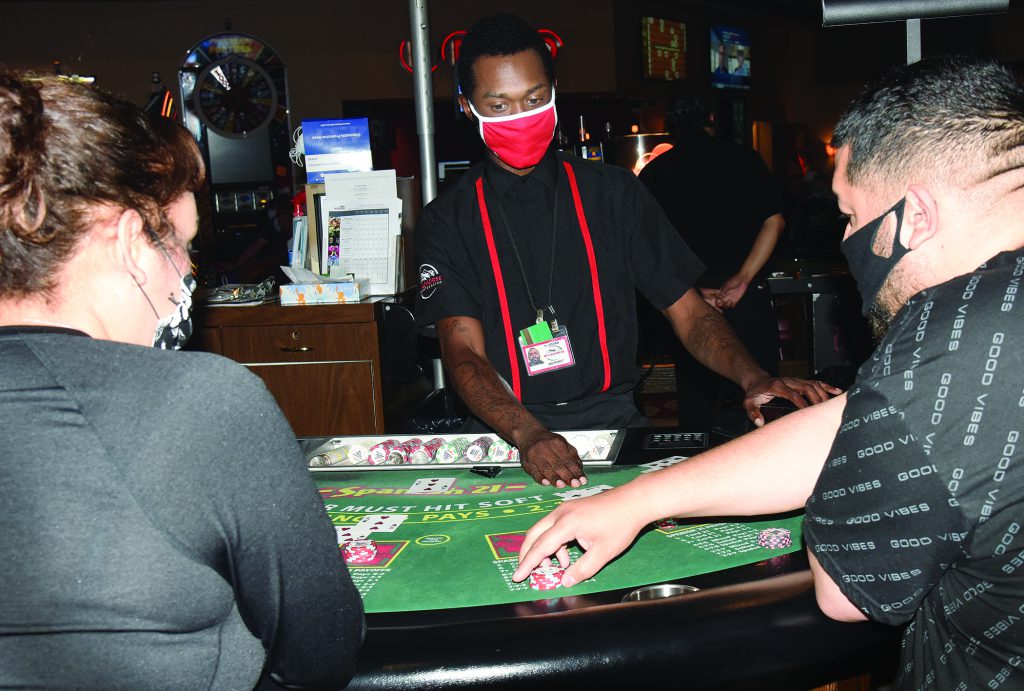 Blackjack dealer Dominique Darwin waits for a player to make his bet on Friday, May 29, the first full day of operations for Wildhorse Resort & Casino since it closed in March for the COVID-19 pandemic.The Wildhorse facilities, including the hotel, restaurants and cineplex, re-opened under strict guidelines that call for, among other things, employees and guests to wear masks.

MISSION – Guests were happy, employees were relieved and tribal leaders were satisfied when Wildhorse Resort & Casino re-opened May 28 on the Umatilla Indian Reservation.

After being closed for more than two months because of the COVID-19 pandemic, Wildhorse met the standards set out by the Incident Command Team’s (ICT) Re-opening Plan as authorized by the Board of Trustees for the Confederated Tribes of the Umatilla Indian Reservation (CTUIR). More than 800 employees came back to work Wildhorse-wide, for intense training on health and safety protocols, before around 500 staff began working in three staggered shifts when the hotel, casino, and Cineplex opened their doors a week later. Arrowhead Travel Plaza has never closed for business and Mission Market opened June 2.

And guests were just happy to get out of their houses after being cooped up under the CTUIR “Stay home, stay safe” Order that had been in place since mid-March. Tribal member William Showaway was wearing a mask but you could tell he had on his usual smile.

“It’s my first time getting out. My daughter was going to Safeway. It feels good to be out of lockdown,” he said.

The decision to re-open coincided with two rounds of COVID-19 testing of 100 individuals by Yellowhawk Tribal Health Center in May. Both tests revealed no positive cases of coronavirus. Other CTUIR entities are expected to open soon under COVID-19 restrictions. Yellowhawk’s reopening plan predicted resumption of patient scheduling at 75 percent in the first week of June with full patient capacity by mid-month, according to its May 5 reopening plan.

Nixyaawii Governance Center is hoping to bring back a limited number of employees under strict COVID-19 hygiene practices and restricted access for visitors and clients in mid-June, according to CTUIR Executive Director Ted Wright. (See story on Page 2.)

BOT Chair Kat Brigham, who had breakfast at Wildhorse on Saturday, May 30, said she visited the casino to hear from staff and guests.

“It was all positive, except someone talked about one woman who had concerns so I went and found that employee and she said she was comfortable coming back,” Brigham said. “The only concern I heard from our people was about others coming in from out of the area and some people not wearing their masks above their nose until they were told. Otherwise they felt safe.”

“People were crowded but happy to be here,” she said.

Wildhorse Casino Manager Al Tovey said that the casino became so crowded that at about 10 p.m. two of the three entrances were closed. More than 500 of the 675 slot machines were in use and all the table games were being played, Tovey said. So for about an hour people were allowed in as others left, and additional staff was called in to keep the casino clean and safe.

BOT member Jill-Marie Gavin insisted on touring the casino before it opened on the afternoon of May 28 with the Gaming Commission and Oregon State Police. BOT Vice Chair Jeremy Wolf joined the group as well.

“I was skeptical at first,” Gavin said. “I felt it moved really quickly. Initially I was concerned that it was inconsistent from the message the Board was putting out on social media to stay at home and be safe. A lot of people don’t understand that ICT (Incident Command Team) had the authority when the decision to re-open was approved. The BOT didn’t have authority over that.”

Gavin said the Board was not invited to the early inspection, but “I insisted on going to see with my own eyes to protect Tribal members.”

When she did go, Gavin said, “I was pleasantly surprised. I know Wildhorse does an amazing job and the Tribes have been leaders in Indian Country with the coronavirus outbreak but I needed to have proof; it’s my responsibility as a Board member.” Gavin said Gary George, Wildhorse CEO, has a “wonderful opening plan” and “ICT has done an amazing job” but “at that point it was just words on paper hours before they were going to open the door. It was my responsibility to see it with my own eyes, so that I would be able to answer to Tribal members and the community that we keeping people safe.”

As part of its safety precautions, Wildhorse purchased the following for safe and health operations:

– 150 gallons of hand sanitizer scattered throughout the casino, hotel and Cineplex in more than 80 dispensers;

– Hand sanitizing stations at each entry to the casino;

– Disinfecting and sanitizing supplies for staff use at all point-of-sale locations with 11,600 clean towels per week;

On a tour of the casino on the first full day of re-opening May 28, casino manager Al Tovey, custodial manager Nick Eastwood, and marketing manager Diane Long pointed out changes in operations. Employees entering the back door walk past a thermal camera that measures their temperature. A temperature higher than 100 degrees sets off a buzzer.

Eastwood said the 150 gallons of hand sanitizer is 60 percent alcohol. Wildhorse is using only sanitizer recognized by the Center for Disease Control and Prevention. The 100 gallons of concentrated disinfectant is mixed six ounces to a gallon. Eastwood figured while we were walking that 100 gallons would fill 3,000 32-ounce spray bottles.

It’s social distancing in a relatively small breakroom, but Wildhorse has remedied that issue.

Turning the corner into the Rivers Events Center, Bobbie Newland from Human Resources was just finishing up a training session for employees. Nearly 700 employees have gone through safe practices of Wildhorse’s “Priority One health, Safe and Clean” program, which is designed to “ensure the health and safety of our guests, staff and local communities.”

The “Priority One” program has a top 10 list that includes wearing a mask on the casino floor, hotel and Cineplex lobbies, public area and while moving around; using distancing markers at ATM, kiosks and money-changing cages; safety screenings at property entrances; and closure of the casino floor from 3-7 a.m. Monday through Thursday for sanitation and deep cleaning.

The back of the Rivers Event Center has been set aside as an overflow employee breakroom. Sometimes up to 400 can be working at the facility and additional space is needed for meals, especially with six-foot social distancing requirements. On the other side of the room are the 105 slot machines that were taken off the casino floor to provide distancing. Pods of slots were created instead of lines of games. Every other slot machine on the casino floor that are still in-line are turned off.

Patrons sitting at a machine can take their masks off and smoke, but they can’t walk around without a mask, which means they can’t walk around and smoke. Blackjack tables are limited to three players. If more want to play a waiting list is started so people won’t mill around waiting. Blackjack players must wear masks and can’t smoke. There are only two beverage stations and there is a server; no self-serve. However, beverage servers will still be walking the floor to serve customers as they play.

As we walked, Long pointed out how customers were observing the six-foot social distancing rules while waiting to use the ATM machine. Tovey said that if people want a slot machine cleaned before they play, they can hit a button and staff will come running. The goal, said Eastwood, is to clean it before the customer asks.

People come into the front entrance vestibule one at a time where their temperatures are measured. Many have their own mask, but if they don’t they are handed one. Gloves are offered. Tovey noted that valet parking is not currently available. The shuttle is closed until Kayak Public Transit resumes. Bingo will begin again, probably in July; poker and banquets are done for the time being.

Jeremy Barkley, Director of Slot Operations, was in the middle of the action slowly turning in circles to observe the activity. A player walked up to him and said he had a ticket stuck in a machine. Barkley immediately pulled out his radio and summoned assistance.

“It’s good to be back,” said Barkley, who never really left.

Barkley has been one of the essential staff that’s prepared Wildhorse to re-open.

“People have stepped up,” he said. “We’re doing our best to make people happy.”

The day before, when the casino opened at 5 p.m., an estimated 230 people played games at Wildhorse, learning about the re-opening by word of mouth and social media.

Long, head of marketing, said Wildhorse wants people to know Wildhorse is a “clean, healthy, safe environment in which to stay and play.” The resort is “retooling” its marketing tactics to support a socially responsible re-opening that reduces activity that promotes crowds and lines, she said.

Promotions are being built that do not have a “gathering” affect and need less staff interaction, which means a calendar that includes fewer large promotion that require close guest-to-staff contact and fewer invitation events. Wildhorse will temporarily eliminate reoccurring Club slot tournaments.

Early marketing messaging will be driving attention to the Wildhorse webpage, Long said, which will encourage guests to review the Priority One Top 10 safety list. The website includes a video of CEO Gary George discussing Wildhorse’s effort to ensure safety.

Long said a “responsible increase” in media exposure will likely be seen in July.

On Tuesday, after the busy weekend, Tovey said the re-opening days were “fantastic, better than we ever expected, especially with no advertising other than social media and e-mail to our customers.”

Tovey said a “glitches” that were made apparent in the first days back have been or are being fixed, and he’s looking forward to smooth operations going forward.

“The ICT is greatly appreciative of the community’s efforts to keep COVID-19 at bay,” Sams said. “As we re-open our entities the ICT will continue to actively monitor the activities of our entities and work closely with Yellowhawk Tribal Health Center to ensure all health and safety precautions are being adhered to in order to keep our entities moving forward. Health and safety are still the primary concerns of the ICT and the BOT.”