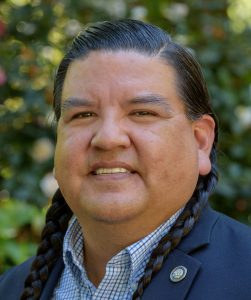 MISSION – Charles F. “Chuck” Sams III has been hired as Deputy Executive Director for the Confederated Tribes of the Umatilla Indian Reservation (CTUIR).

Sams, who has served for the last seven years as the CTUIR Communications Director, will start his new duties Monday, July 27.

“We were fortunate to have several talented tribal member candidates, but the interview panel scored Mr. Sams highest,” said Ted Wright, Executive Director for the Tribes. “He is clearly well-qualified to help lead the CTUIR forward in this new role.”

In May of 2017, the CTUIR Board of Trustees eliminated the position of Deputy Executive Director, but by the fall of 2019 the Board had directed Wright to review the need for the position. A review of the Tribal government organizational structure determined that the need existed for at least one and potentially two deputy positions.

Sams will report directly to Wright, who reports to the Board of Trustees.

Sams has served in a number of executive positions in both the non-profit and for-profit sectors, regionally and nationally, over the past 25 years. He has worked for the CTUIR for the past eight years as the environmental health and safety officer/planner, and as communications director. Sams holds a Bachelor of Arts in Business Administration from Concordia University and a Master of Legal Studies from the University of Oklahoma School of Law.

The Confederated Tribes of the Umatilla Indian Reservation is made up of the Cayuse, Umatilla, and Walla Walla Tribes, formed under the Treaty of 1855 at the Walla Walla Valley, 12 statute 945. In 1949, the Tribes adopted a constitutional form of government to protect, preserve and enhance the treaty rights guaranteed under federal statute.