Board of Trustees members and Presidents of the Round-Up and Happy Canyon Boards talked over Zoom June 24. 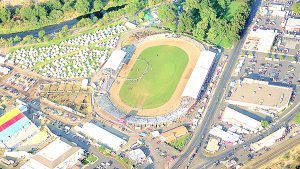 MISSION – Triggered by a lack of coordination before the COVID-19-caused cancellation of Pendleton’s annual rodeo and night pageant, members of the Confederated Tribes’ Board of Trustees (BOT) and officials from the Pendleton Round-Up and Happy Canyon have agreed to begin formal conversations to improve their Indian-and-cowboy relationship.

But the BOT also zeroed in on a couple of perennial issues like the lack of covering in the bleacher section where Indians from the teepee encampment sit to watch the rodeo and the decrepit conditions of the concrete-block restroom on the east end of the Indian Village.

In the end, the Tribal and event leaders agreed to begin quarterly meetings, with the first set for the week of Aug. 10.

Even though Bracher said there are no current plans for a cover on the Indian seating area, the meeting summary by BOT Chair Kat Brigham proposed the formation of an east bleachers committee.

Additionally, at the request of the Round-Up and Happy Canyon representatives, CTUIR Executive Director Ted Wright is to provide a comprehensive list of Tribal contacts.

Bracher and Hawkins said they and other Board members would continue to participate in Tribal functions, when invited, noting members’ attendance the last few years at the Christmas Celebration when the Happy Canyon Princesses are introduced.

The June 24 meeting has been a long time coming, BOT members said, but it was hastened by the recent decision by Round-Up and Happy Canyon Boards to cancel Pendleton’s September classic event, which annually triples the town’s population and brings some $50 million into the local economy.

Even though the Confederated Tribes have been part of the Round-Up since its inception in 1910 and Happy Canyon since it began in 1916, Tribal leaders were not included in the decision-making process to cancel. It wasn’t until a few days before an announcement was to be made that Round-Up chiefs were asked to participate in a video statement. Chief Sampson took umbrage at the invitation because there had been no previous consultation and he made his frustration known in a front-page story in the East Oregonian.

However, at the Zoom meeting with the BOT, Sampson was magnanimous.

“I was asked to come down and make a presentation with no information on the plan,” Sampson reminded the Board, Bracher and Hawkins. “In good faith I couldn’t say it protected Tribal participants. Since March you’d been meeting with the state, the county and the city, but our community, the Tribal government, was in the dark on it … We have an opportunity to build our relationship back up … My hope, going forward, is that we can have serious, true transparent and trusted communications with Happy Canyon and Round-Up.”

During the June 24 meeting, Bracher acknowledged an overall “lack of knowledge and lack of communication on our part” and said the Round-Up Board is willing to do better.

“The challenge as a Board is that the turnover is rapid,” Bracher said. “Now that we have a General Manager in place and we have more business-like policies and procedures in place there will be institutional knowledge for new members. Before it was plug in and play, hit the ground running. We made it up as we first came on Board. I hope to see that improve.”

BOT Secretary Sally Kosey, who has been involved with Happy Canyon for some 50 years, said it is important to meet often.

In years past, she said, a half dozen or so Indians – a chief or two, a camp director, etc. – would meet once a year with the Round-Up Indian director.

“One time a year doesn’t cut it,” Kosey said, even though she praised the work of Rob Collins, Indian Director for the last several years.

“As we move through this process, it’s important that you listen to our concerns and not wait until the month before Round-Up. Rob did an awesome job, but one month is not enough. We need better collaboration. You need to know about us and how we feel. We need to have a say-so, or at least better input in the Indian Village and I feel like today is the beginning to move forward to make changes happen.”

BOT member Jill-Marie Gavin told Bracher and Hawkins that having Board members educated about the Tribes would be great, but for meaningful change the education needs to be organization-wide.

“The ingrained culture that spreads information about our Tribes doesn’t pay correct homage and the fact that we’re in our homelands,” Gavin said, suggesting Tribal education could be part of an orientation for all volunteers.

Hawkins called that a “phenomenal idea” and Patton, the general manager, was eager to put it into action.

“I see a huge value in knowing how your government works. We give tours of the Round-Up grounds and I’d love to speak more intelligently about the Tribes. We don’t want to give negative messages.”

Patton said she “would love” to meet with Tribal representatives to develop an educational piece and expand it throughout the Round-Up and Happy Canyon organizations.

BOT Vice Chair Jeremy Wolf, noting that Indians were conducting horse round-ups long before the Pendleton Round-Up was in existence, said the Tribes and Pendleton have a storied history together that will continue.

And now, since there is a hiatus in the annual event, there is time to work out issues rather than perpetuate frustrations.

“We may be at two different levels, but we’re all in it for the good gathering that is the Round-Up and celebration,” Wolf said. “We want to work toward those and have it written down so people who come in after you, including this Board, so we can evolve together long into the future.”

Chair Brigham said it is important that “we know your process and it’s important for you to know us.”

At the same time, Brigham said, the CTUIR is a sovereign nation.

“We don’t want to fight you, but we’re not afraid of a fight either.”

That’s when Board members brought up the east-end bleachers and other “concerns.”

What is said every year at Round-Up was repeated at the meeting: People in the east-end bleachers look directly into the sun to watch the action. Much of the bucking-chute action is blocked by the concrete photography/judges box. The entrance to the bleachers is gravel, not concrete, and the oftentimes-dusty, narrow lane is very difficult to navigate, especially for elders, those with walkers or wheelchairs, and baby carriages. And after the recent construction, the east end is the only section of the Round-Up bleachers that are not covered.

Bracher told Brigham, “There’s been some discussion, but there’s not a current plan in place” for improvements to the east end grandstands.

Well one thing is for sure, Brigham said.

Kosey suggested a working group sit down and work toward a solution to the bleachers and the east-end bathrooms, which she called “gross.”

“For years they’ve been working on it. Last year a plumber was there almost the entire week,” Kosey said. “The elders had to go to the other end of the Village. I know you applied for some grants, but at some time Round-Up is going to have to pick up your feet and put in a new bathroom down there.”

Sandy Sampson agreed with Kosey about putting together a committee to move forward on projects.

“You built a place where people can pay extra to sit and eat. It’s time to assign a committee to work on moving forward to cover that one little section of bleachers,” Sampson said. “Something needs to change and we’ve got a year to get it done.”

Sampson, who acknowledged she doesn’t take part in Round-Up and doesn’t even like Round-Up, said the Tribes are ready to discuss issues with the Round-Up and Happy Canyon Associations and develop policies together. Other BOT members suggested a written memorandum of understanding or memorandum of agreement.