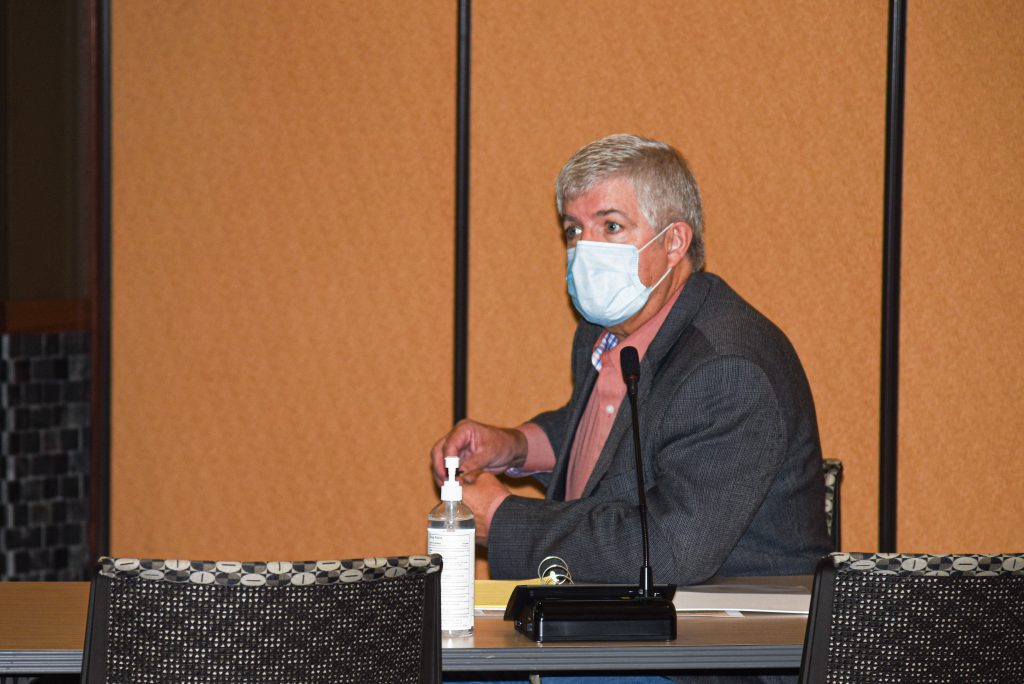 The visit allowed for a thorough historical presentation by Deputy Executive Director Chuck Sams III and a tour via Kayak trolley around the reservation.

“It’s great you’re taking the time to learn more about the tribe,” Board of Trustees’ chairwoman Kat Brigham told Bentz from her seat in chambers, as he sat at a table approximately 20-feet away.

Before any presentations or tours began, Brigham asked Bentz if he had any questions.

The potential congressman had multiple topics on his mind.

“Where’s the tribe on the sea lions in Cascade Locks?” he asked.

“We do support removal of sea lions,” Brigham said, “because of the huge impact on our salmon resources. We’ve found they have a pretty big impact on our naturally-spawning fish. And that’s the ones we’re looking to rebuild.”

“And the cormorants?” Bentz followed.

“We’re also concerned about those as well,” Brigham said. “We’re looking at all impacts.”

Bentz also asked: “Is the tribe involved in the renegotiation of the Columbia River treaty?”

“Yes,” Brigham said. “It was really interesting. When we first started, we told the chief negotiators, (Bonneville Power Association) and the (Army Corps of Engineers) that we wanted to be involved. … The 15 tribes then developed what we call a ‘white paper.’ Then the white paper was not only presented to the action agencies, BPA and the Corps, but we also presented it to the states and other federal agencies and we got a regional decision on the white paper that was shared with the department of the congress in 2013.

“So we met the deadline,” she added, “but we were still waiting to find out what the next steps are. I understand we’re taking baby steps, but there are steps being taken.”

Bentz stated he was involved in the Columbia River Treaty as well “until it disappeared into the state department,” he said. “Not sure when it’s going to come out of there. It’s obviously terrifically important, unbelievable important.”

He noted when he visited the CTUIR last, the tribe had acquired some land and conducted a rehab of a stream. He was curious to hear an update.

“We applied our River Vision,” Brigham said. “That River Vision is to restore the habitat to a more natural state. It was Meachem Creek. We actually got 17 funding sponsors to go in and do a bunch of the work. It was great, because we had a lot of youth come in and gather the fish from the stream. Once we got all the living creatures we could get out of there into a tote, we then walked off that area and as soon as we blocked it off, the very next day we came back up and started to see springs we hadn’t seen in decades.

“So it was very good,” the chairwoman added, “because of the 2019 and 2020 flood, it was not as bad as everybody thought. We had some impacts, but at the same time it was not at the devastation they thought it would be.”

Deputy Executive Director Chuck Sams brought Bentz through a presentation that gave an overview of the Confederated Umatilla Tribes’ history.

“I’m adjunct faculty at Whitman (College),” Sams said. “I teach indigenous politics there. This would normally be a 6-week course, but I’m going to try to get through this in 30 minutes.”

“We don’t believe we came here on the giant ice trail,” Sams said, noting archaeological trash heaps were not found to provide evidence of the theory. “Our belief says we were put here by the Creator. Our ability to speak; our ability to see comes from the eagle; our skin comes from the hide of the elk; our hearing comes from the owl; and the most importance gift, the salmon gave us our voice, where you get what’s known as the Chinook Jargon.

“But salmon also gave up it’s life, which is why salmon are central to the tribal people. By punishment, his people are keepers of the salmon: Those who responsible for to ensure that they return year after year, not only to replenish ourselves, our soul, but to replenish our food sources.”

The presentation also keyed on issues Bentz may come in contact with, such as federal recognition of other tribes; the Supreme Court Decision in Oklahoma that stated most of the eastern part of the state was tribal reservation land; and the CTUIR’s intention to regain land it lost on the eastern boundary of the reservation.

“You can see (our reservation) was much larger,” Sams said, noting the tribe is working with members of congress and senators on the issue. “Congress would have to act in a way to return those lands; 90 percent of the lands are federal lands, so it wouldn’t be a hard issue. There’s no taxes in those lands already, and we would not seek any land in holdings that were private holdings be returned back to us. But we are interested in at least the federal land within the eastern boundary.”

Sams also walked Bentz through suggested etiquette when working with Indian country, including: Listen and be patient; learn that each community or tribe has its own timeline of when things are going to be done; each community or tribe has its own definition of success; be direct, straight and tell the truth; know what we’re seeking and recognize that whatever it is is subject to negotiation; solve problems together; remember you’re a guest in a tribal community; we always serve our elders first, they are the heart of our community; understand there’s turnover; have a sense of humor; thank people and organizations.”

Before Bentz departed on the trolley tour, Brigham noted the CTUIR would like to meet with him at a time the full Board of Trustees could attend to discuss issues further.

“After Nov. 3 we’re going to be looking forward to having a meeting,” she said. “We’d like very much to sit down and talk with you.”

The tribe’s COVID-19 response was also an issue Brigham wanted to share.

“COVID, as you know, when we first got word in March, we immediately closed our casino down, our education facility and our senior center,” she said. “I was really proud of our board for saying we’re going to put health above economics. It impacted us. We’re still trying to figure out how big that impact has been, because we closed down for weeks and re-opened. … The casino is what keeps us going.”

Brigham noted there have been 1,308 COVID-19 tests conducted by Yellowhawk Tribal Health Center, with 81 of those positive.

“We’re requiring social distance and handwashing all the time,” she said.