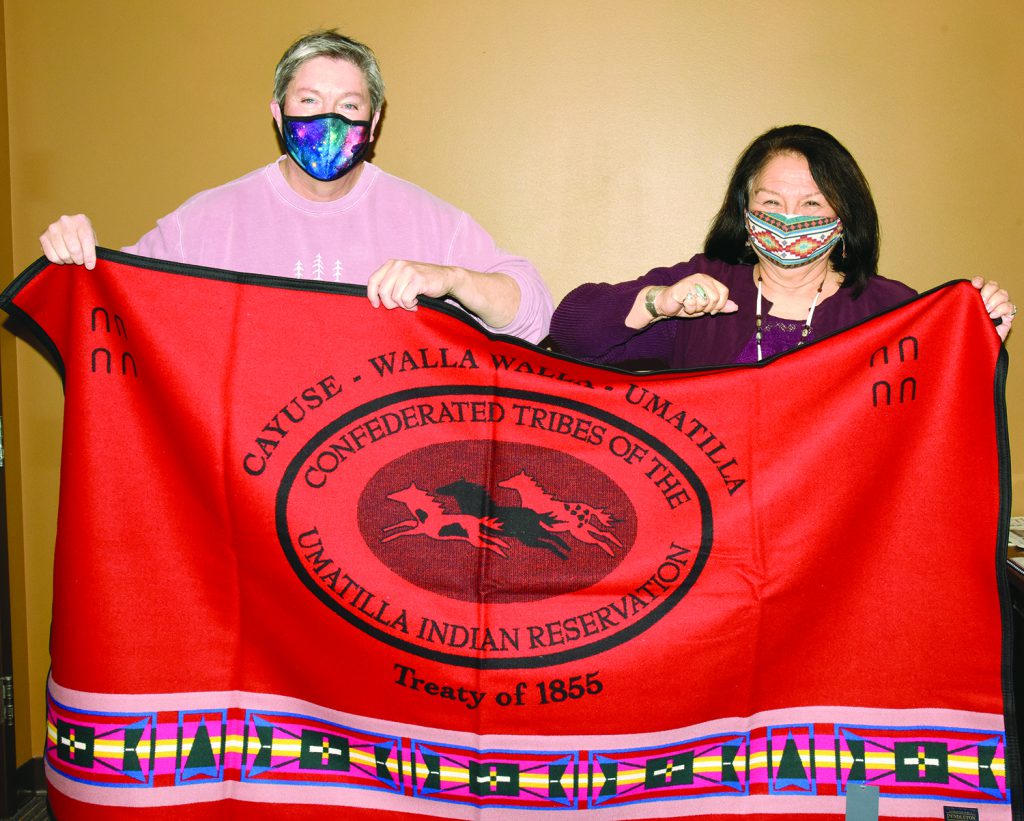 Half of Ted Wright’s tenure was emergency ‘nightmare’ with near constitutional crisis, floods and COVID

MISSION – When Ted Wright took the job as CTUIR Executive Director in November of 2018, he had a track record of sticking around for a couple of years.

Two years later, Wright is gone, leaving the Confederated Tribes of the Umatilla Indian Reservation in search of happiness with the Spokane Tribe of Indians at Wellpinit in northeast Washington.

“I’m going to work a few more years and I want to make a valuable contribution somewhere,” said Wright, 65. “There is so much talent here; you’ll be fine. I want to go someplace where I’m needed.”

Charles F. “Chuck” Sams III was formally appointed Nov. 2 by the Board of Trustees as the Interim Executive Director and will remain in the position until a permanent replacement can be hired. Sams normally serves as the Tribes’ Deputy Executive Director.

Wright’s first year was no party, working with a Board that created a near constitutional crisis over the election eligibility criteria for a sitting member of the Board. That member was eventually removed from the Board and had to go to Tribal Court to be reseated. In the end, all but one position of that previous Board changed; five members were voted out of office in November of 2019.

The first month, January, was “almost normal,” but even it “started off on the wrong foot” when the newly elected Board’s first retreat bombed.

“Let’s just say the Board wished it had been organized differently, and I take responsibility for that,” Wright said.

Then the February flood hit, triggering the first Incident Command Team. The flooding cost millions of dollars in damage and tribal, county, state and federal disasters were declared.

The floodwaters had hardly subsided when COVID-19 reared its ugly head, activating a second emergency declaration and initiating a second Incident Command Team, one that would remain in effect even as Wright starts his new job at Wellpinit. During the pandemic, Tribal government was curtailed and businesses, including Wildhorse Resort & Casino, were closed.

While the pandemic continued, there was another smaller flood, plus fires in western Oregon that caused such hazardous smoke that CTUIR closed shop for several days. People were wearing their masks to keep out smoke as much as the coronavirus.

“It’s been a nightmare of a year,” Wright said. “To have an Incident Command all year, that’s unheard of … right up to the day I’m leaving. Almost half my tenure has been in emergency management.”

And Wright said the crisis mode has made an impact on what he’s been able to accomplish as the government’s top hired administrator.

Instead, that assessment, considered a critical government evaluation, is at least six months behind schedule and any planned changes will now run into financial restrictions.

“Now, because of COVID, we’re going to be in a deficit spending situation next year,” Wright said.

In fact, he added, with a “frozen budget” employees should not expect merit or cost-of-living increases in 2021.

It could have been worse if not for the CTUIR’s retro-budgeting, which limits spending to the money on hand instead of spending anticipated revenue.

“We could have been looking at layoffs and cuts to programs,” Wright said.

Wright said the foundations – through planning – have been or will soon be laid for progress on a number of fronts. One of the most important to him is climate change adaptation.

Completion of a Tribal Energy Plan, one of his pet projects, should be completed in the next two to three months, Wright said, but it will take five to ten years to implement its features.

Meanwhile, the Tribes need to be planning to create a “sustainable community,” one that can “grow its own food, raise its own proteins, and become energy independent.”

“There won’t be a point on earth that doesn’t have access to the Internet in five years,” Wright predicts.
In a matter of years, Wright said, Tesla will lead the way to energizing the auto industry, homes will create power to the grid, solar will become a dominant electricity generator with new battery technology, and hydro powered dams will become irrelevant.
Tribes should be leaders in the next revolution.

“CTUIR should be self-sustaining in five to 10 years,” he said. “If I was here, we’d be all solar, all geothermal. I’d never design a school or a government center without energy advantages in place.”

Wright said he’s confident the CTUIR “can plan and get there.”

“It won’t be me, but I’m hoping this leadership will continue. We shall see. But climate change is inevitable. Climate change is going to create disasters. There will be more fires, more floods, and food availability will be critical. We will need food sovereignty; growing stuff will become a challenge.”

He’d been an advocate of hemp since he arrived, but other than one Board member who resigned mid-term, nobody was interested in pursuing such a business venture. The new Board was game, but then America woke up to 2020 and nothing has been the same.

“By now we’d have had our first crop harvested in a partnership with the OSU (Oregon State University) Extension Service, but all hell broke loose,” Wright said. “This new Board has spoken in favor of this.”

As for cannabis, Wright thinks the CTUIR is overlooking the chance to make money.

“Any tribe that doesn’t have a retail outlet for cannabis is missing out on an economic opportunity,” he said. “I understand why some don’t want to … the connection to harder drugs, but as a business it is completely viable.”

And why, he wonders, couldn’t the lab facility at the Energy and Environmental Sciences Program (formerly known as the Department of Science and Energy – DOSE) be used to test for cannabis potency and pesticides? According to the Oregon Health Authority, of the 22 accredited cannabis testing laboratories, not one is located in Eastern Oregon.

“We could be doing that for western states or Indian retail outlets,” Wright said. “And there are plenty of options besides retail cannibals … mobile processors, transport … within the industry.”

Also among the things he would suggest the CTUIR do:

An overhaul of the Office of Information Technology (OIT) to “get it into the 21st Century”;

Make the Human Resources Department “customer-service oriented” so it will be better geared to help internal CTUIR departments;
Push for staggered terms for elected Board of Trustees and General Council positions to create more continuity in government leadership;
Contract with the executive director to promote stability;

Create more for-profit business enterprises, including the farm program (hemp), under a holding company;
Create a for-profit energy sector, perhaps using the Tribes’ connection to the Columbia River, “leveraging the use of hydropower to build a battery plant;”

Advance the idea of more digital media, “even if it means providing a Chromebook for every household” so they can read the CUJ.

Wright also had something to say about employee morale and kindness.

Every few years, depending on leadership, the CTUIR goes through times of turmoil when morale seems to fall. It was like that under the former Board of Trustees, particularly during in-fighting over the residency requirements for a sitting Board member.

But Wright said employees should think twice about their situation before complaining.

“I think the people here – everybody including leadership – because they haven’t been elsewhere don’t know how good they have it,” he said. “You won’t find better benefits … If people had the opportunity to see elsewhere they’d see they are treated pretty well. The compensation is good, the benefits are good, the retirement is outstanding. And this organization attempts to communicate better. If you think it’s bad in this country, go somewhere else and you’ll see it’s really not so bad here.”

“Sometime, February through October, to think about what we went through,” he said.

Wright was mindful in his last days here that leadership and management should strive for more kindness.

He said he learned a few months ago that he needed to model kindness if he expected it from others.

“I kind of do (model it), but I learned a valuable lesson through the pandemic,” Wright acknowledged. “It sounds simple. Be kind and expect someone to be kind back.”

As an administrator, he said, “You can’t be soft, but that doesn’t mean you can’t be kind.”

Wright said he was enlightened, ironically, from a TED Talks presentation.

“You have to make an attempt. There’s too much negativity. You look at all the comments on Facebook, all the bull—-, and you think the world is a terrible place. A lot of good things happen during a crisis, really, but you might never know it. There are examples you never hear about.”

He was surprised a few months ago when he met someone in Seattle who has become his girlfriend.

“I didn’t expect that to happen,” he said.

A flight from Spokane to Seattle is direct. From Pendleton it takes two hops to visit her.

Leaving the Umatilla Indian Reservation was probably in his plans all along.

Spokane is a place, he said, that he’s always wanted to check out.

Like he wanted to check out Pendleton when he was working on a small Rancheria in Northern California.

“Life is too short not to be happy. I told you that when I came here,” Wright said, referring to an interview when he first arrived in town two years ago.

“That’s why I move around. Eventually I’m going to find a place where I’ll be happy all the time.”