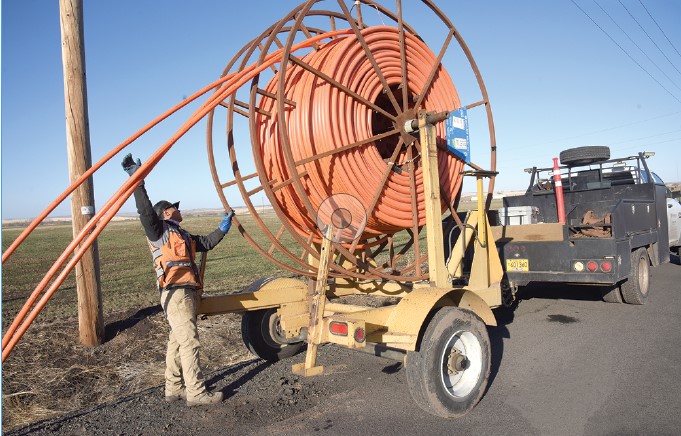 MISSION – The Federal Communications Commission (FCC) approved in late October a FCC 2.5 GHz spectrum channel license that allows the Confederated Tribes to operate a wireless communication system for residents of the Umatilla Indian Reservation.
The wireless communications system will be housed in the “Pandemic Preparedness Building” project at Coyote Business Park South. The 10,560 square foot “preparedness” building will be paid for by CARES (Coronavirus Aid, Relief, and Economic Security) Act funds of just over $2 million.
It’s part of the $36 million in federal CARES Act aid awarded this year to the CTUIR.
Part of the Pandemic Preparedness Building includes a specially constructed file server room and storage area to host the Tribes’ broadband equipment. The long-term goal of the Tribes’ broadband project is to provide reliable wireless communication internet service, just like that provided in Pendleton, to reservation residents.
In its application for a 2.5 GHz spectrum channel, the CTUIR justified the need for broadband to support distance learning, tele-medicine, and public safety communications for tribal law enforcement, emergency response and the fire department to address the COVID-19 public health emergency, which was declared March 2 by the Tribes’ Board of Trustees. (As of Dec. 1, more than 130 reservation residents had tested positive for the novel coronavirus.)
The COVID-19 pandemic has had a “disproportionate impact on Indian Country,” highlighting the need for broadband and other wireless services, according to a news release from Sen. Ron Wyden that said he and Sen. Jeff Merkley, along with other legislators, sent a letter to FCC Chair Ajit Pai in May that advocated for equal internet access.
“Because tribes have historically lacked access to spectrum to deploy broadband networks on tribal lands, 1.5 million people living in Indian Country have been left without basic access to online health, public safety, and educational services,” the Wyden news release states.
The broadband project, with a cost of about $1 million, is planned in three phases. The first phase will include a “loop” connecting fiber optic broadband service to all tribal buildings and business enterprises to a new broadband “point of presence” (POP) at the new Pandemic Preparedness building; a second phase will be installation of a “fiber optic backbone” from the reservation to a major internet hub in downtown Pendleton; and a third phase will be system development of “last-mile” delivery to households across the reservation.
The Pandemic Preparedness Building (see other story on Page 1A) will host the broadband POP facility, services and information technology upgrades to Tribal government, plus facilities for the storage and distribution of emergency food supplies (see other story on page X), and personal protection equipment (PPE).
The broadband project is being coordinated with the CTUIR departments of Economic and Community Development, Children and Family Services, Natural Resources, Public Safety and Public Works, as well as the offices of the Executive Director, Finance, Planning, and Information Technology. Additionally, the coordination includes Yellowhawk Tribal Health Center.
In August, Spectrum Pacific West, LLC (Charter Communications), one of the companies that provide Wi-Fi on the Reservation and in Pendleton, filed a protest with Business Oregon challenging the $750,000 CARES Act business Oregon grant to the Tribes. The company contended that the Tribal Broadband Project would over-build the existing Charter communication system on the Reservation.
Charter withdrew their protest Aug. 24 after a conference call with Tribal staff demonstrated that the Tribal Broadband Project would primarily serve households not currently served by the existing Charter system.
According to the federal requirements, the CARES Act funding must be spent by Dec. 30, 2020, which means construction will have to be complete on the “Pandemic Preparedness Building” and on the initial construction phase 1 of the fiber optic cable system.
However, according to requirements from the FCC’s spectrum channel application, owners have five years to build-out the actual Wi-Fi communication system to maintain the FCC license.
A total of 154 spectrum licenses, from more than 400 applications, were issued to tribal applicants by the FCC. In Oregon, four other tribes also received FCC licenses – the Confederated Tribes of Grand Rohde Community of Oregon, Coquille Indian Tribe, Cow Creek of Umpqua Tribes of Indians, and the Warm Springs Telecommunications Company.
“This is a major step forward in or efforts to close the digital divide on Tribal lands,” FCC Chairman Pai said in a prepared statement about the Tribal 2.5 GHz licenses. “These communities face the digital connectivity challenges faced by rural Tribes. By prioritizing Tribal access to this mid-band spectrum, we are ensuring that Tribes can quickly access spectrum to connect their schools, homes, hospitals and businesses.”