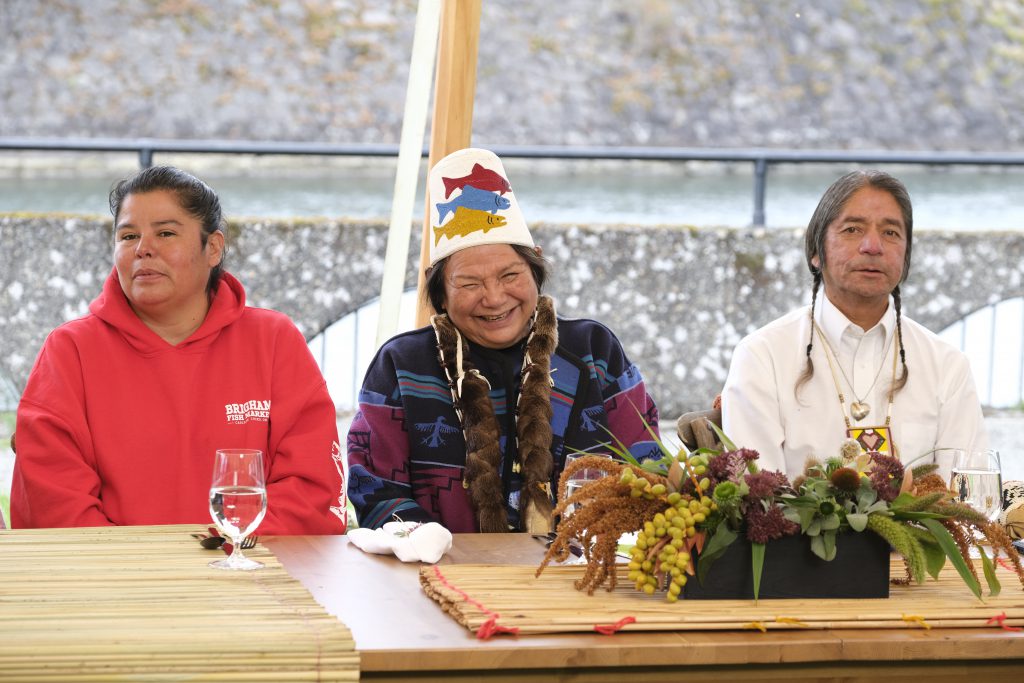 Hand-picked roots and salmon paired with television cameras and chefs when the cast and crew of Bravo’s “Top Chef” gathered with members of the Confederated Tribes of the Umatilla Indian Reservation(CTUIR) on the banks of the Columbia River.

“Top Chef,” currently in season 18 with the CTUIR episode airing May 6, is an Emmy and James Beard award-winning reality television series that features chefs competing against each other in culinary challenges. This season has a new batch of 15 “All-Star” chefs that include previous winners, finalists and fan favorites, vie for the coveted title in the city of Portland.

Episode 6 will have a surf and turf challenge using Tribal “First Foods,” also known as traditional foods, provided by gatherers of the (CTUIR) and Yellowhawk Tribal Health Center (YTHC). Tribal members Wenix Red Elk and Linda Sampson did a first foods presentation for the contestants explaining the traditional ways of preserving the different meats and how the Tribes gathered, cultivated, and prepared the different roots and medicines.

The initial plan was to do the presentation outside on Thunder Island – which is connected to Cascade Locks – but Mother Nature had her own plans. Red Elk said it was raining more than she had seen in a while, which forced them to improvise and film in Cascade Locks under a tent.

“It was raining hard,” said Red Elk. “We were totally soaked from head to toe. My moccasins were soaked, everything was wet.”

She also explained that due to the pandemic, everyone had to be very careful and keep their distance. Arriving on set, she knew that the crew had been in their own “bubble” and had been getting tested several times a week. CTUIR participant, and those from other tribes, also had to provide documentation of negative COVID tests when they arrived at the filming location. Compliance with testing was coordinated by the CTUIR Communications Department and Yellowhawk Tribal Health Center. Because of this, she was expecting only a handful of people to be present but to her shock, that was not the case.

“I never seen a set so amazing, it was a big production, probably a few hundred people,” said Red Elk. “It was really an amazing experience.”

After the presentation, the contestants went under the Bridge of the Gods to scaffolds owned by sisters Kim Brigham Campbell, owner of Brigham Fish Market located in Cascade Locks, and Terrie Brigham Price, store manager. Contestants watched as they fished off the docks of the Columbia River using their hoop nets. The filming was done Sept. 25-26, which was at the tail end of the Salmon run, explained Brigham Price.

“We were fishing but not catching,” Brigham Price joked.

She went on to say that their time with the contestants was mostly educational, teaching them how the fish were caught and the tribal history of the villages that once existed in the area.

The following day, the rain dried up and the sun was out. The contestants were given an array of first foods to choose from for their competition such as chokecherries, elderberries, wapato roots (duck potato), and xous (biscuit root), as well as deer meat and sturgeon.

The area on the river where the competition took place was a challenging spot, according to Red Elk who has experience cooking and preparing food in that area. She distinctly remembers one of the competitors picking up the sturgeon and saying, “How the heck do I cut this?”

“A lot of it was food they weren’t used to using, and anyone who cooks on that river, and I cook on that river all the time, knows that it’s hard,” said Red Elk. “The wind is always blowing.”

“This one team, hit it on money,” said Sampson. “They listened to us on food order and presented the foods on the plate in that order.”

For the CTUIR, presentation of the first foods is done in an order that follows the the Tribal creation story and the seasonal round in which the foods offered themselves for sustenance to the Indian people. The order is: water, aquatic species, big game, birds, roots, and berries.

Sampson continued, “They explained what they learned and they incorporated everything we brought into that dish. To me, that was the winner. If you’re going to cook to a first foods presentation, that’s the way to do it.”

Viewers will see that cat fish was also an option provided to the chefs, however Sampson wanted to make clear that “CatfishCat fish is not a first food.”

Other Tribal members who helped gather and harvest some of the roots and berries were Teara Farrow Ferman, Carrie Sampson-Samuels, Talia Tewawiwina, and Shoshoni Walker, who are part of the CTUIR and YTHC First Foods and Foods System Working Group. AdditionalAdditonal Tribal spectators included Sam Spino, Trinette Minthorn, and Jake Eastman.

“It was a good experience because now I’m thinking of our foods in a different way,” said Red Elk. “Like using Indian celery and making spices or butter out of it.”