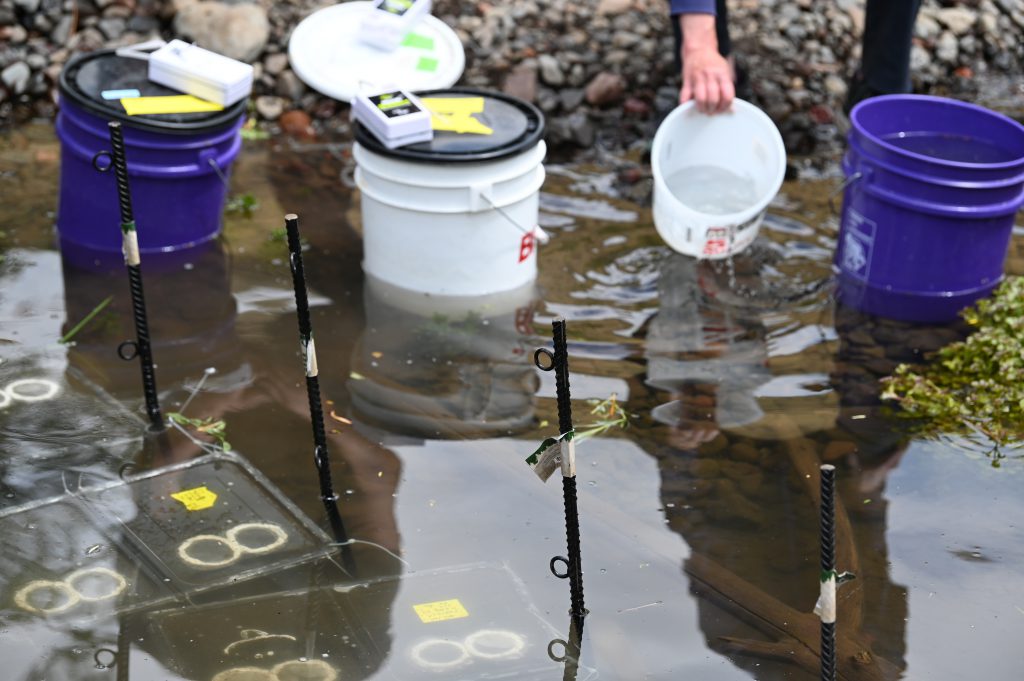 On May 21, the long-awaited restoration project came to fruition with the release of
approximately 150,000 juvenile Pacific lampreys in waves by the thousands.

A decade has passed since a revitalization effort was launched to bring back lamprey to the Tucannon River, part of the Confederated Tribes of the Umatilla Indian Reservation’s ceded territory.

The effort is part of actions called for in the CRITFC member tribes’ Master Supplementation Plan for lamprey, approved in 2018 with environmental compliance completed in 2021.

“It took 10 years’ worth of research to get to this day,” Aaron Jackson, the CTUIR’s Department of Natural Resources Lamprey Project Leader and CTUIR member, said following the release. “It feels good to bring something back to nature that was once here and once very abundant. We’ve done our part. Now it’s time they do their part.”

What is the lamprey’s part?

“To survive,” Jackson said. “To grow, to provide that First Food that’s been missing for our Tribal members for a long time. And to restart the ecological functions and processes that lampreys give to our streams.”

DNR Fish Tech Kanim Moses, a CTUIR member, helped carry, release and stake down containers with lamprey alongside Jerrid Weaskus, a Nez Perce Tribal member and fellow Fish Tech. The two, wearing waterproof overalls, set up the location. They’ve enjoyed lamprey as a First Food caught at Willamette Falls, and share a passion for the lamprey to return to areas where they’ve long disappeared.

“We’ve shocked this area,” Moses said. “There haven’t been lamprey up this far in the Tucannon in many years. Historically, the Tribes have camped along here, too. The goal is to restore all these lampreys so we can come and harvest them in the future.”

Weaskus, a former Fish & Game Officer who patrolled the area where the lamprey were released, said there are not many Tribal fishermen who come to Tucannon River.

“I’m just glad to say that we’re part of it,” he said. “My kids or grandkids can say their dad or grandpa helped put that fish back in here. The river needs those fish to be productive and natural. They filter, clean the waters. These babies will be purifying the
water.”

Jackson hopes the lamprey thrive and eventually travel down the Snake and Columbia rivers to one day return to streams and spawn.

“Lampreys are a panmictic population, meaning they do not return to their natural stream, but rather return to a stream where the adults can smell the larvae,” Jackson noted. “I hope it will be a return to our ceded area.”

“These guys are really, really hardy,” Jackson added. “We’re moving them at the stage that’s the
best point of time just before first feeding.”

As a sign of, perhaps, good luck, the lamprey were artificially born on April 22: Earth Day, according to Dr. Alexa Maine, a DNR Fisheries Biologist III.

“I raised a lot of lamprey at the lab, so it’s nice to see them get out where they should be and do what they’re supposed to do,” she said.

“Our goal of our pilot program is to reach a half a million,” he said. “This is the first of its kind except in Finland or Japan, and there’s never been a lamprey project with this kind of monitoring and intensity to measure the success.”

DNR staff camped near the site for five days, checking on the lamprey periodically. “The idea is to just initially evaluate survival,” Jackson said. “If there’s mortality, we’ll try to get an estimate of what that is.”

The lamprey were hauled in two different carrying cases, including 5-gallon buckets and a series of large, transparent boxes. Each were marked, symbolizing groups that had been acclimating in Tucannon River water and those who were doing so in well water. The lamprey were genetically marked with tissue samples of their parents and sub samples among the release group. The selected area will be used as an index site for future monitoring.

“We will look for these larvae in future surveys and take a genetic sample,” Jackson said. “All of these are genetically marked, so we can tell what parents they’re from, and evaluate which strategy, worked best.”

Moses summed up the day as one with many firsts.

“It was the first lamprey in this area in many years. It’s our first time releasing pro-larvae instead of adults. It’s a new tributary,” he said.