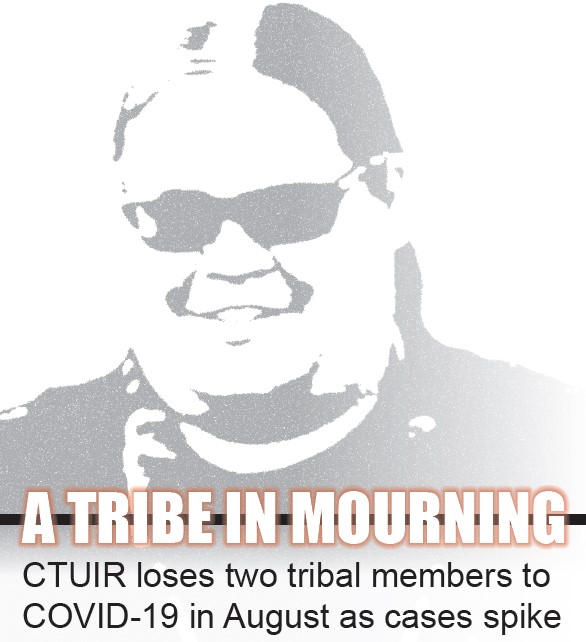 MISSION – By definition, “átway” is the Umatilla Tribal word used to respectfully name a deceased person.

“It has been heartbreaking to hear persons deteriorate daily until our staff send them to the E.R. or they require hospitalization or they pass away,” Hines said. “It’s devastating. It’s frustrating. It’s irritating. It’s saddening. Our staff is doing their best to lead the effort to protect the community against COVID-19.”

Board of Trustees Chair Kat Brigham said the Tribal government sent its thoughts and prayers to the families, and urged Tribal and community members to get vaccinated.

“We still have four more months in 2021 and pray that more CTUIR members and community members will get vaccinated to help avoid any more possible loss due to COVID in 2021,” Brigham said.

Shawna, the Tribe’s General Council Secretary, hoped her son would glide through the sickness safely, despite being unvaccinated.

“As my son’s condition worsened, I began asking our family and friends to pray for his recovery,” she said. “As we know, that was not to happen. I desperately wished he’d been vaccinated. It’s very possible that had he been vaccinated, his case would have been mild and he would still be here.”

Jill-Marie said her brother had a general mistrust of the government, and noted the CTUIR is less than 50 percent vaccinated.

“I think it just boiled down to: He likely didn’t have enough information,” she said. “As his sibling, in retrospect, I wished I’d had more conversations with him about it — though there wasn’t much you could do to deter what he had decided. He was unsure of the vaccine.”

Prior to the two deaths, the Tribe had only lost one Tribal member over the course of the pandemic.

With the Pendleton Round-Up around the corner in mid-September, Tribal officials released recommendations for CTUIR members to safely attend the event. They fully expect a rise in cases to be linked to the event, which plays host to thousands of visitors each year.

Shawna was one of a number of Tribal leaders who spoke out against Tribal members attending the annual event during a virtual meeting with Pendleton Round-Up officials.

“I understand your desire to go forward, but I don’t support the event this year,” she said. “I appreciate your work that you did to try to mitigate the threat to our community, but I can tell you that I will encourage my entire family not to go near Pendleton Round-Up this year.”

BOT member Armand Minthorn also spoke against it, saying it is very concerning there will not be a limit on the number of attendees.

“I have a big concern that Round-Up is going forward,” he said. “Mainly because the after effects of the Round-Up — that’s when things will begin to happen. … The steps that Round-Up is taking (to protect the community from COVID-19) are great, but I believe it’s not enough.”

Teara Farrow Ferman encouraged Tribal members and employees to continue wearing a mask, social distance and remain safe for the coming weeks in an Aug. 31 memo in which the Tribe also announced mandatory vaccinations for four entities.

At last update, on Aug. 30, Yellowhawk had five new cases, 15 active cases, and 476 total cases. The vaccination rate is listed at 46 percent, one active case involves a person who is hospitalized, and there are three confirmed deaths.

Hines said Yellowhawk staff have close connections with their patients.

“Our contact tracers and nurses are in contact with cases and contact them daily,” Hines added. “They know our patients well — they become like family members, in a sense. Our staff care for them.”

Hines said Yellowhawk is fighting misinformation.
“We’re fighting fake news that’s spread around social media,” he said. “It makes our job that much more tough. COVID-19 is real and we need everyone to do their part.” 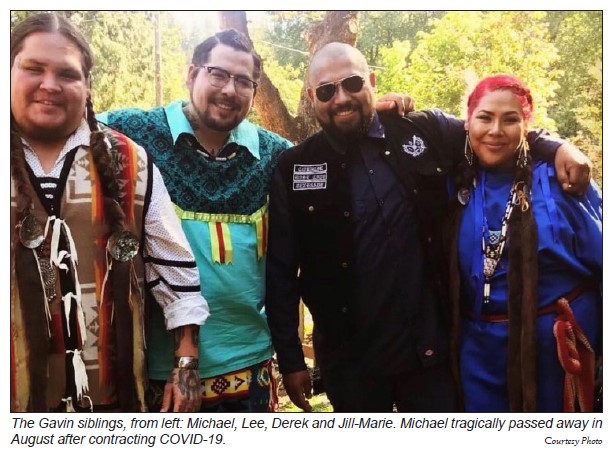 Gavin was named “hey-oo-makin,” which means grizzly bear roaring up. The name dates back more than 100 years to a signer of the Treaty of 1855, the family said.

The Longhouse religion, Washat, was one of the two worlds Gavin navigated regularly in life, including his devout belief in Christianity. In fact, he was days away from becoming a salaried pastor before his hospitalization for COVID-19.

Family members say he was very proud of being a Cayuse man: exercising his treaty rights, participating in the Longhouse ceremonies and growing his hair long. His uncle Calvin Shilall, a respected traditionalist who once held the title of whipman within the Tribe, taught him many lessons along the way- lessons he planned to pass down to his own nephews and nieces.

“He was the best uncle in the universe,” Jill-Marie said. “He was always invested. He couldn’t wait for the day until his nephews and nieces were old enough to go hunting. That was going to be his pride and joy.”

Michael’s brother Lee recalled him being a protector.

“The sharpest memory that comes to mind is a time I was being pulled down some rapids and I was scared I was going to be swept away and he came out and pulled me back in,” he said. “Michael played multiple roles in our family. He was also the older brother who walked down the hallway punching the air, saying ‘If you get hit, it’s not my fault.’”

Jill-Marie said Michael took the role of being the able-bodied man of the house very seriously, as their father was paralyzed in the late 1980s.

“He started working at age 14 and always contributed and was always very supportive and protective and provided as much comfort or luxury as he could throughout the years,” she said.

As a teen, Michael got involved in a gang in Portland, along with his brothers. That membership extended into his move to Pendleton before he felt conflicted and left.

“Seeing him leave (the gang) and hearing the reasoning he had for going was hard,” Lee said. “But watching him dedicate himself to the reason he left (Christianity) and seeing him flourish made me proud of him. It gave me understanding as to why he felt it pertinent to leave this life behind him.”

Over the course of his life, Michael drifted between Portland, Los Angeles and Tennessee before finding his calling at home among his people. No matter where he went, or what lifestyle he maintained, Michael always found his way back to Christianity, Jill-Marie said.

The shock of his death is wearing off, she added. His passing came a year after his uncle Chet Tias passed away from COVID as the first CTUIR member death. Their family has been hit hard and hope their stories can help prevent future losses.

“Whether they’re old or young, every person that passes away possibly could have been prevented,” Jill-Marie said. “Any moment we continue on and are not sharing information to at least cause people to rethink their stance (on vaccinations) could be another family that is in mourning.”

Michael’s mother Shawna, in the weeks after losing her son, reacted to the loss.

“From the start of this global pandemic I’ve watched from my safe and well protected home as the world fell around us,” she said. “Often, hearing of thousands dying per day in urban areas made me feel a pang of guilt and sorrow for the many families, hoping and praying that it would not come near our doorstep. I was thankful to the CTUIR Incident Command Team for their hard work in holding the virus at bay from our tribe and community. At first, when my son confirmed he had tested positive for COVID, then my brother and I the same, although knowing he was unvaccinated I hoped he would glide through safely as we were. My brother’s symptoms were mild, mine somewhat stronger but nothing dramatic. As my son’s condition worsened I began asking our family friends to pray for his recovery. As we know, that was not to happen. I desperately wished he’d been vaccinated. It’s very possible that had he been vaccinated his case would have been mild and he would still be here. When we were first asked after his passing, I said that I didn’t want to take a hard line that vaccination is the end all of this virus.

Today I continue to believe that to vaccinate or not is a very personal choice and I will not presume to advise one way or another. What I will say is, please consider the option of vaccination if you haven’t. Weigh the balance of your life and the lives of all you love. This virus is far from over. The only way to get rid of it is to arm ourselves with all that science and our Creator has made available to us. Please, just give my words some thought.”

Lee said his brother Michael’s legacy will be that he was a man who did anything and everything to take care of his family.
Jill-Marie said the family is just now beginning to understand how big of a task that truly was.

STEPPING INTO POWER: Sams sworn in at NPS