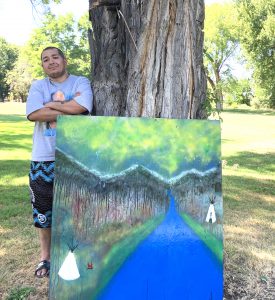 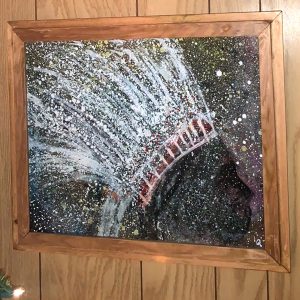 CTUIR member Justin Quaempts went from star athlete, to Tribal leader to now being an acclaimed independent freehand spray-paint artist.
Just two years into being an artist, he’s got his own collection, which will be on display at the Pendleton Art Center on Oct. 7.
“My recent discovery of my artistic skills has opened up a new way for me to not only express myself creatively, but more importantly it provided a therapeutic avenue for me to truly heal after my much- needed back surgeries,” said Quaempts. “I’m taking a healthy risk. You don’t really consider yourself an artist but other people tell you ‘Hey, you’re a pretty good artist’, and it’s humbling.”
Quaempts was a potential budding pro athlete prior to injuries suffered during his athletic career . His father, CTUIR member Billy Quaempts, gave him art lessons in his downtime after his surgeries.
“It was the worst experience I ever gone through in my life,” said Quaempts. “I was immobilized for a month after the second surgery, and ultimately my dad gave me a few basic art lessons to pass the time while I slowly recovered from my surgeries.”
“I seemingly could spray-paint for hours on end and not focus on the pain of my recovery,” he added. “I desperately needed that for my spirit.”
In the future, Quaempts sees his work being printed on T-shirts.

Fashion is an area he’s already delved into, as can be seen by his more than 2,000 followers on Depop.com (username @justkillinitq), a social shopping platform that offers handmade items and second-hand pieces.
In between his sports and his art career, Quaempts was elected a Member at Large for the BOT for the CTUIR in 2013. He was serving in the last year of his second two year term before unexpectedly resigning. Shortly after his resignation, he underwent two surgeries five months apart.