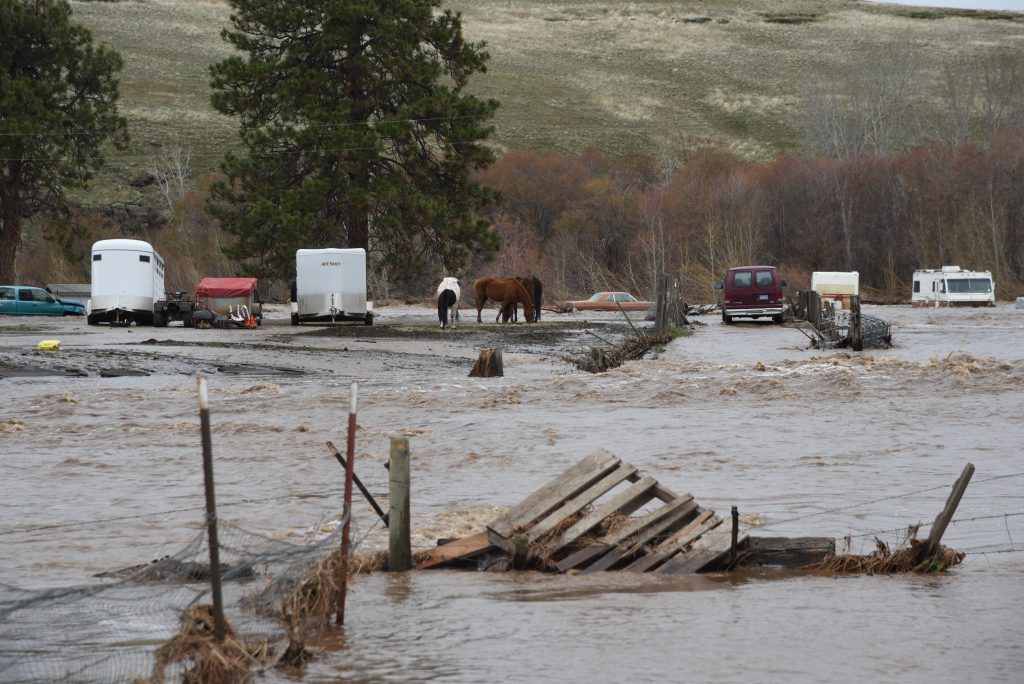 Two horses stranded on an island during flooding. CUJ Photo/Casey Brown
By Casey Brown of the CUJ
UMATILLA INDIAN RESERVATION – A State of Emergency was declared Feb. 6 by the Board of Trustees for the Confederated Tribes of the Umatilla Indian Reservation (CTUIR) when the Umatilla River breached its banks Feb. 6-7.
Heavy snow topped by four inches of rain and unusually warm temperatures caused a melt that resulted in record-level flooding on the Umatilla Indian Reservation and in three eastern Oregon counties and Walla Walla County in Washington. Residents of the reservation, in Pendleton, Weston, Milton-Freewater, and Echo were hit hard.
Several other locations issued states of emergency: in Umatilla, Wallowa, and Union counties; several municipalities, including Pendleton and Milton-Freewater; and at the state level by Governor Kate Brown. A federal disaster designation is being considered by the Confederated Tribes and State of Oregon.
A measuring station near Gibbon records the height of the river in feet. In 2019 the average was between 3.5-4.5 feet. The floodwater Feb. 6 sent the river level to a new high of 12.08 feet.
According to Kate Ely, CTUIR Umatilla Basin hydrologist, that equated to water flows of 13,500 cubic feet per second (cfs).
Water levels were much higher than what people typically refer to as a “100-year flood,” but is more appropriately called a 100-year recurrence interval, according to the United States Geological Survey in the US Department of the Interior.
Ely said the numbers fall in the upper range of the 500-year frequency. The peak was just over 12 feet near Gibbon and caused flooding from Bingham Springs (41 miles east of Mission) to Echo and Stanfield (30 miles west of Mission).
High levels were also recorded on the equipment in Pendleton. The East Oregonian reported that Pendleton’s city manager said the waters reached 19.2 feet and was flowing at 20,300 cfs.
One life was lost. Janet Tobkin Conley, 62, was found dead having appeared to be swept away by rushing water near Bar M Ranch, just east of the boundary of the Umatilla Indian Reservation.
The flood caused an untold-amount of damage to private property and public infrastructure, but officials on the Umatilla Indian Reservation say it surely will be in the millions of dollars.
City of Pendleton and Umatilla County are reporting millions of dollars in infrastructure damage to bridges and roadways, among other locations.
While most of the devastation occurred within the first 48 hours, as of the end of February there were houses that still have water running through them.
“We know that the river has created a lot of new channels with some of those being from breached levees,” said Paul Rabb, incident commander for CTUIR.
An emergency operations center was established on the reservation in the Public Safety building and one in Umatilla County at the Sherriff’s office.
Designated shelters appeared all over the affected region, including the Community Gym and Cmuytpáma Warming Station in Mission and the Pendleton Convention Center in Pendleton. On Thursday (Feb. 6) night, supplies and donations were already pouring in to both locations. The National Guard brought waterproof fire starter bricks to Mission, and the Red Cross set up shop in the convention center.