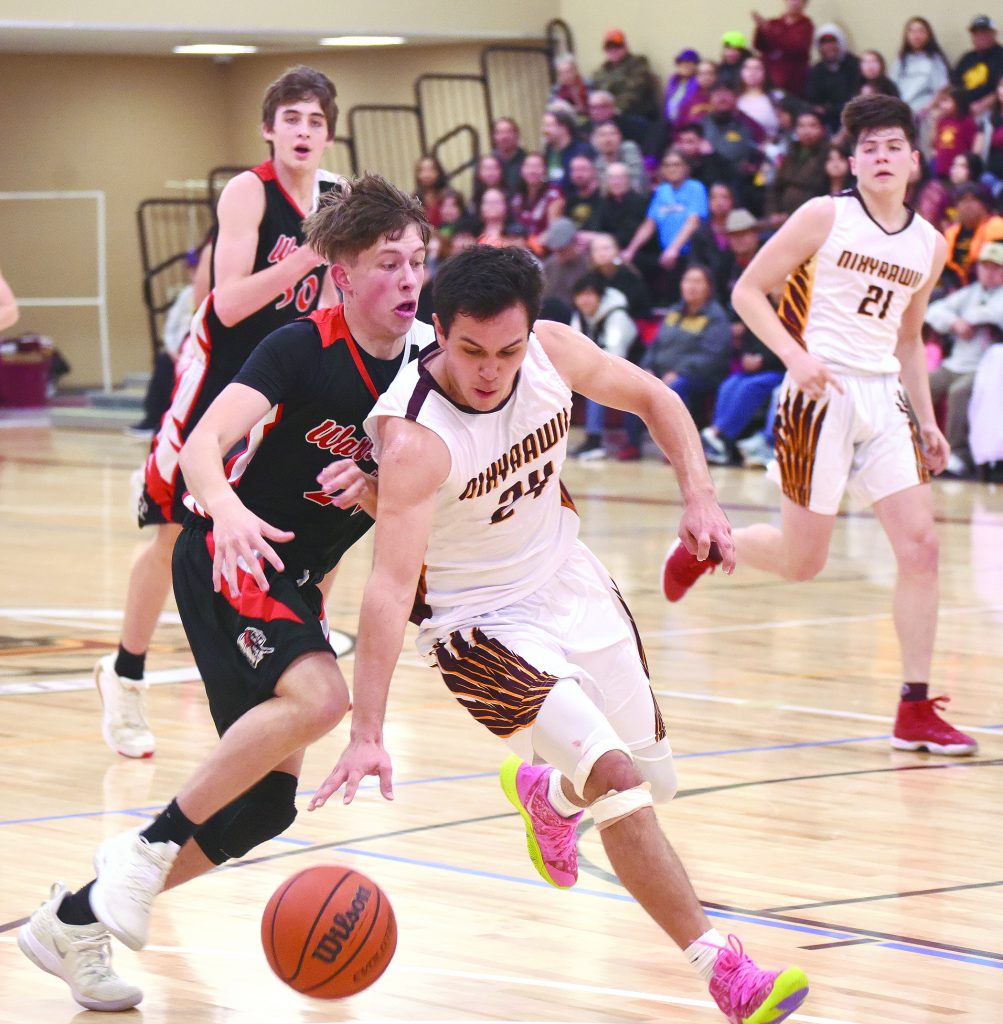 Mick Schimmel steals the ball away from a Siletz Valley dribbler in Nixyaawii’s 85-41 win Feb. 28 in the Eagles Nest in Mission. The win advanced the Golden Eagles to the Class 1A State Basketball Tournament in Baker City. Nixyaawii, the defending state championship, were to open play Thursday, March 5, against Trinity Lutheran, the team they beat in the title game last year. Trailing the play is freshman Shane Rivera. CUJ Photo/Megan Van Pelt
By the CUJ
MISSION – It was over before it started and when it ended it was emphatic.
The Nixyaawii Community School boys raced to a 22-0 lead and built a 50-point cushion in the third quarter before freshman Shane Rivera finished it off with a dunk and an 85-41 win over Siletz Valley in a game that sent the Golden Eagles back to Baker City.
Mick Schimmel, who led all scorers with 25 points, said after the game he’s ready to defend Nixyaawii’s state title against the seven other teams that made the playoffs.
“We’ve been there before. We know what to do,” he said. “Every possession counts. We have to work for everything.”
The game Feb. 28 was a play-in bout – the second for Siletz Valley, who had to travel from the Oregon Coast to play Nixyaawii, which was playing its first game of the post-season.
The Golden Eagles jumped out so fast the Warriors were dumbfounded. The game was into its 10th minute before Siletz Valley finally made a bucket to make the score 31-3.
Coach Shane Rivera said he’s seen his team improving over the last couple of weeks and is glad to have his full roster going into the final week of play.
“We were in sync,” Rivera said. “We were a step faster each possession. I think they’re a little more serious now; there was a sense of urgency.”
Tyasin Burns, the Old Oregon League player of the year, went out early and scored 12 points in the first quarter, hitting three three-pointers. It was an early barrage. With the score 8-0, the Nixyaawii offense went like this: Moses Moses hit a three, then Burns hit back-to-back threes, then Magi Moses made a bucket underneath and Burns hit another three to finish the quarter.
Schimmel took over in the second quarter.
He went hard to the basket over and over, scoring 15 points with just one three-pointer. Schimmel made 11 of 12 shots plus the three-pointer.
Burns and Magi Moses each added four points and freshmen Aaron Barkley and Dylan Abrahamson each had a bucket as the Golden Eagles stretched their halftime lead to 41 points at 49-8.
Much of the time in the second period there were three freshmen on the floor – Rivera, Barkley and Abrahamson – and every player had seen playing time before the end of the third period.
With 4:08 left in the second period, Abrahamson took the ball from the back court all the way to the key then did a spin move around the defender and put it up off the glass. The ball bounced around and finally fell through the ropes, drawing one of several loud cheers from the crowd during the night. That gave Nixyaawii its first 30-point lead.
With 2:30 to go in the third period, Coach Rivera emptied his bench with William Sigo, Saint Schimmel, Kirk Houle and Jace Ashley on the floor with Schimmel. In the fourth, that foursome played with Burns.
Everybody but Sigo scored and he was credited with two rebounds and an assist.
Siletz Valley closed to within 39 behind a handful of three-pointers from Anthony Simmons, who finished with 18. But as soon as Abrahamson was assigned to defend him Simmons didn’t score again.
Other game stats showed Schimmel with seven rebounds and five steals. Rivera was credited with six rebounds, five assists, four steals and a block. And, oh, that dunk at the buzzer. (He’d tried a dunk earlier but didn’t get quite high enough.) Moses Moses had eight boards and three steals; Magi Moses had seven boards; Burns had eight rebounds and two assists; and Barkley had four steals.
After Schimmel, Burns had 19 points followed by Moses Moses with 8; Magi Moses, Rivera and Barkley with 6 each; Ashley and Abrahamson with 4 apiece; Saint Schimmel with a high-arching three-pointer; Houle and Reuben Bronson with 2 points each.
There were only six fouls called in the game. Nixyaawii was 2 for 4 from the line. Siletz Valley didn’t shoot a single free throw.
After the game, Schimmel was smiling, but he was being humble, too.
“I felt like we played with intensity,” he said, “but I don’t know if we played our best basketball.”
Coach Rivera offered a more sanguine assessment.
“It’s hard to point to anything negative,” he said.