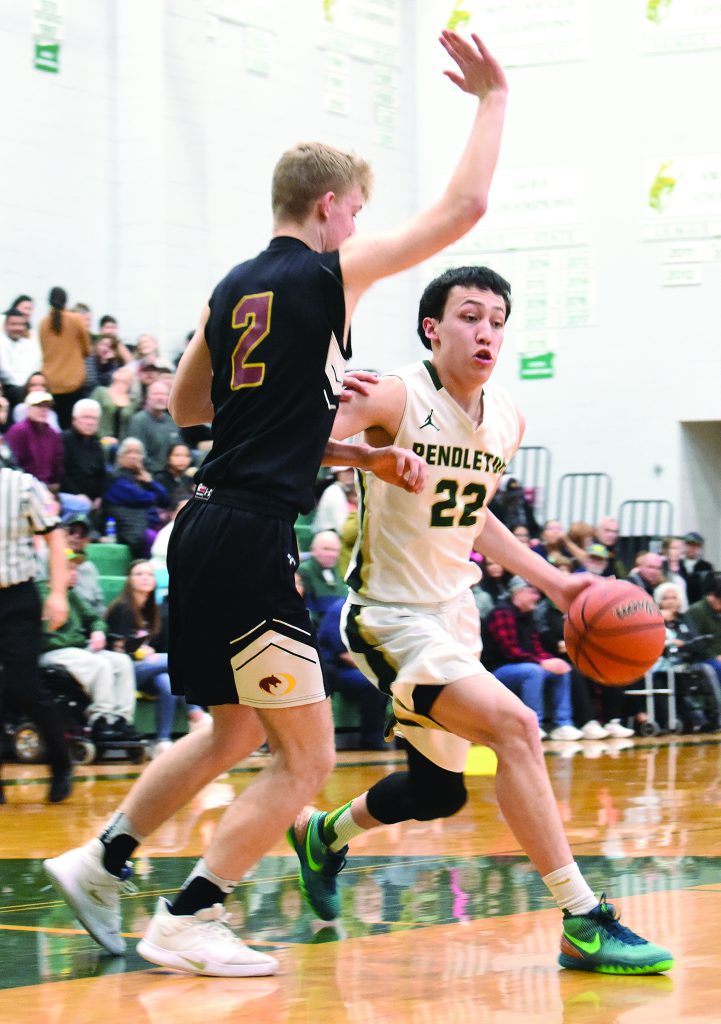 Stockton Hoffman works against a defender on the edge of the paint. CUJ Photo/Megan Van Pelt

PENDLETON – Dakota Sams broke his father’s school record for the most three-pointers in a game Feb. 25 when he hit nine against Ridgeway High School in Redmond.
The 95-58 win for Pendleton High School was the final Intermountain Conference game for the Bucks, which won the league title and will play Willamette on the road Saturday, March 7.

Pendleton finished the regular season with a record of 7-2 in league and 18-5 overall.

Ryan Sams, who is an assistant coach, held the record with eight three-pointers set in a game during the 1991-92 season.

Ryan Sams happened to have done it twice – on back-to-back nights in Central Oregon against Crook County and Mountain View.

“Having your son beat your record is something special,” Ryan Sams said.

The young Sams went 9 for 14 on his long shots, made one two-pointer and was 5 for 6 from the line to lead the Bucks with 34 points.

Ryan said his shooting percantage wasn’t nearly as good as his son’s.

On the girls’ side, Pendleton finished the season 8-2 in the IMC and 16-6 overall, upsetting Ridgeview in their final game at home, 60-52. The win avenged an earlier 9-point loss on Ridgeview’s court earlier this year.

A 12-0 rally started with a three-pointer by Hoisington and the Bucks grabbed a six point lead, 55-49, with about a minute to go.

Pendleton girls will be on the road for their first round playoff game Friday, March 6.

Much of this information was garnered from East Oregonian.