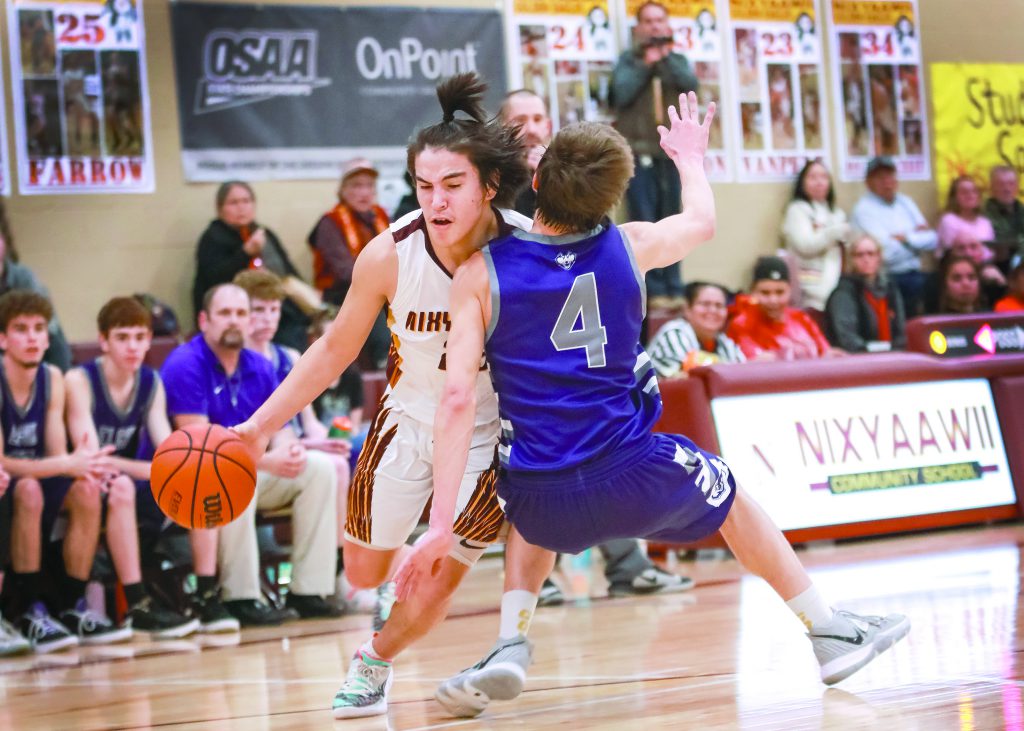 Tyasin Burns, who was named Player of the Year in the Old Oregon League, posterizes Elgin’s Tristan Simpson in the first half of Nixyaawii’s 69-38 would-be victory Feb. 14. However, the Golden Eagles had to forfeit the game. Read about it below. At left, Magi Moses posts up Joseph’s H. Miller at the Old Oregon League finals in Baker City. Photo by Robert McLean.
By the CUJ
MISSION – The Nixyaawii Community School boys strung together what looked like seven conference wins in February, including the Old Oregon League championship in Baker City March 21 and 22.
That would have given the Golden Eagles their second straight undefeated season in the Old Oregon League.
But alas, their conference mark was marred on Valentine’s Day, Feb. 14, when a 69-38 score was recorded as a forfeit loss when it was realized that Nixyaawii had sent a player on to the floor for more than his night’s allotted six quarters. Elgin called it to Nixyaawii’s attention and Golden Eagles coaches self-reported the infraction to the Oregon School Activities Association (OSAA).
Not to worry though.
The Golden Eagles (13-1 OOL and 23-5 overall) whipped Siletz Valley 85-41 in a play-in game and are one of the top eight teams heading back to Baker City for the Class 1A State Tournament where they will defend their state title.
At the OOL Conference championships, Nixyaawii took revenge on Elgin, 61-41, on Feb. 21, and then won the title over Joseph, 77-54.
Junior Tyasin Burns was named OOL Player of the Year and Mick Schimmel was also named to the OOL first team all-stars.
In the title game, Mick Schimmel led all scorers with 26 points while Tyasin Burns and Magi Moses each scored 13. Moses Moses and Shane Rivera both scored 9 points.
Nixyaawii doubled Joseph in the first quarter, 18-9, as Schimmel scored a dozen. Moses Moses canned three three-pointers in the second quarter and the Golden Eagles stretched the halftime lead to 15.
In the third period, Schimmel had 10 and Rivera scored all 9 of his points as NCS added a dozen to their cushion.
Nixyaawii took revenge on Elgin in the first game of the District tournament, whipping the Huskies by 20 points behind Schimmel’s 26. Magi Moses had 12 and Burns added 11. Moses Moses scored 7, Barkley had 4 and Saint Schimmel made one free throw.
Elgin actually led at the end of the first quarter, 16-14, but the Golden Eagles shut the Huskies down in the second period and led at halftime, 31-23. Schimmel split his scoring up with 13 in the first half and 13 in the second half.
The Golden Eagles pulled away in the third quarter, outscoring Elgin, 17-5, with Schimmel scoring 7 and Magi Moses adding 6 points.
Here’s what happened in other February games:
NCS 82, Pine Eagle 37 on Feb. 6
The Golden Eagles led 20-1 at the end of the first quarter and 35-10 at halftime. Not much more needs to be said.
Four players were in double figures – Schimmel had 23, Bronson 17, Burns 15 and Magi Moses 13. Also scoring was Rivera, Abrahamson and Barkley.
NCS 87, Helix 26 on Feb. 7
Worse than Pine Eagle. NCS led 28-0 at the end of the first period and 50-3 at halftime.
Burns scored 28 with six three-pointers. Schimmel scored 17 and Moses Moses had 12. After that Rivera had 7, Barkley and Magi Moses 6 each, Abrahamson 5, Bronson and Saint Schimmel 3 each.
Moses Moses had 11 rebounds, three assists and three steals; Rivera had five rebounds; Schimmel had five assists and four steals; Burns had five assists; and Bronson had three rebounds, five assists and two steals.
NCS 76, Imbler 38 on Feb. 13
The Golden Eagles led by 11 after one and by 26 at halftime.
Burns scored 26, with all but one coming in the first three quarters. Schimmel had 13 with Kirk Houle adding 9, Saint Schimmel 8, Rivera and Abrahamson 7 each, and Lyle Soaring Eagle with 5.
NCS 69, Elgin 38 on Feb. 14
This one had the sorry forfeit ending.
Nixyaawii led 41-16 at halftime so there was no doubt about the outcome.
The player that was sent onto the floor in the varsity game had also played in the junior varsity game – that’s how his quarters added up to more than the six allowed per night.
Burns led scoring with 37 and relied on the long ball only once. He had 25 points in the first half.
Other scorers were Rivera with 12, Schimmel with 11, Abrahamson 5, Soaring Eagle and Ashley with 2 each.
NCS 67, Joseph 61 on Feb. 15
This was the season’s most competitive conference game, but Nixyaawii hit the road to Enterprise without four varsity players, including two junior starters, who were ineligible.
It worked out fine.
Burns scored 24, Schimmel had 20, Rivera had 11, and senior William Sigo, getting his first start, scored 10. Soaring Eagle added a bucket.
NCS led 40-27 at half, but Joseph came back and took a brief lead and trailed by just a point, 51-50, heading into the final frame.
In the fourth, Nixyaawii relied on Schimmel with 6 and Burns with 5 to outscore Joseph 16-11 and win by six points.

STEPPING INTO POWER: Sams sworn in at NPS