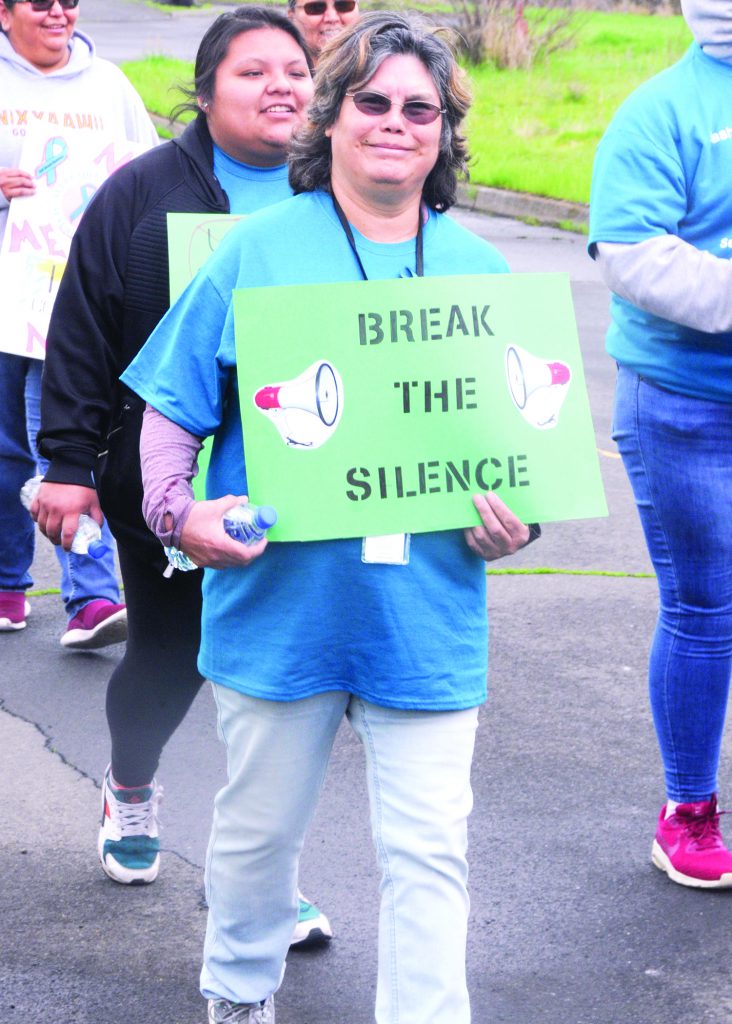 Enola Dick, Family Violence Services advocate for the Confederated Tribes of the Umatilla Indian Reservation, in last year’s Sexual Assault Awareness Walk. This year’s walk is scheduled for April 16 and is part of a month of awareness activities. CUJ File Photo, 2019/Casey Brown
By Casey Brown of the CUJ
MISSION – Enola Dick is on call 24/7/366. She answers calls, day and night, from sexual assault and domestic violence victims.
But that’s not all she does.
April is Sexual Assault Awareness Month (SAAM), and Enola is going to paint to the town teal –  with a little help from tribal youth.
Students from the Nixyaawii Student Youth Leadership Against Violence group will paint windows throughout Mission teal, the color of Sexual Assault Awareness.
She also has a full month of activities scheduled that include a Sexual Assault Awareness Walk on April 16 and Wear Denim Day on April 29.
She says that the aim of the sexual assault awareness movement that is much more than awareness.
“The ultimate goal is prevention.”
The theme for 2020’s SAAM is “I Ask,” and the focus is on consent.
“The theme is to empower and put consent into practice,” Enola said.
More than permission, consent is about accepting any answer: “When you ask, don’t get mad at a “no” answer. That’s part of consent,” Enola said.
She acknowledges that asking for consent can be awkward for people of all ages, so she advises to ask before the “heat of the moment,” discuss boundaries and comfort levels as part of a healthy relationship, and practice, practice, practice.
“The more you practice consent, the better you get at it,” she said.
Everyone has the right to say no, including boys and men. Enola pointed out that everyone has boundaries and different comfort levels, and it is okay and healthy for them to express their limitations by saying no.
“Guys can also say no too,” she said. “What it all comes down to is respect your partner’s wishes.”
Enola also explained when someone cannot give consent, such as when they are under the influence of alcohol or drugs, incapacitated, and people with certain cognitive disabilities.
“Sexual assault isn’t just rape,” Enola said. “It’s consent for kissing, hugging, touching, hand holding.”
For people who have been sexually assaulted, they have resources available to them, including reaching out to Enola or going to the Family Violence Services office in the Nixyaawii Governance Center, 46411 Timine Way.
Even though rape is the most underreported crime, according to Enola she has still seen seven clients effected by sexual assault and/or domestic violence in the past year.
The thing she notices most about the people she works with is their ability to survive traumatic events.
“These women are resilient and we want to talk about that too,” she said.
Many women and men who deal with sexual assault or domestic violence do not report for a few reasons, Enola said. She listed fear of not being believed by authorities, fear they will be blamed (victim blaming), fear of humiliation, shame, or seeing the perpetrator in court, among other factors.
Victims also may not want to speak up because of who the perpetrator is.
“A lot of sexual assault victims know their perpetrator. They could be a family member, intimate partner, community member,” Enola said.
Throughout the month of April, Enola and the Youth Leadership Against Violence students will get the word out on consent, resources, and more.
They will be painting jeans and t-shirts that will be displayed throughout the community. On April 1, they will have a display table at the Nixyaawii Governance Center from 1-3:30 p.m. On April 6, they will be at Yellowhawk Tribal Health Center, 46314 Timine Way, from 1-3:30 p.m. On April 9, they will be at Nixyaawii Community School.
Everyone is encouraged to wear teal on April 7 and participated in the Sexual Assault Awareness Walk on April 16. People will being meeting at the Senior Center, 51 Umatilla Loop, at 11:30 a.m. and the walk beings at noon. For more information, contact Family Violence Services at 888-809-8027 or Enola Dick at 541-240-4771. 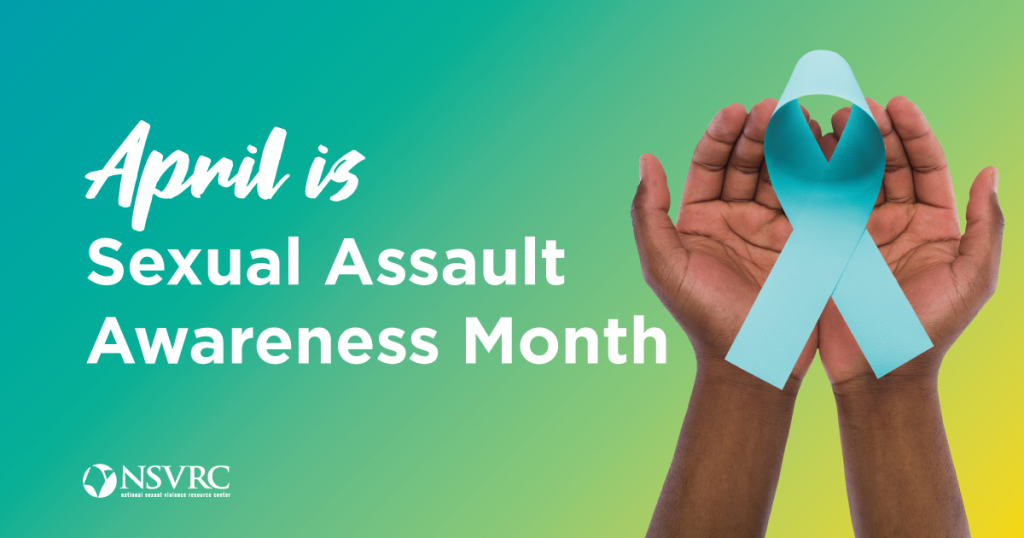