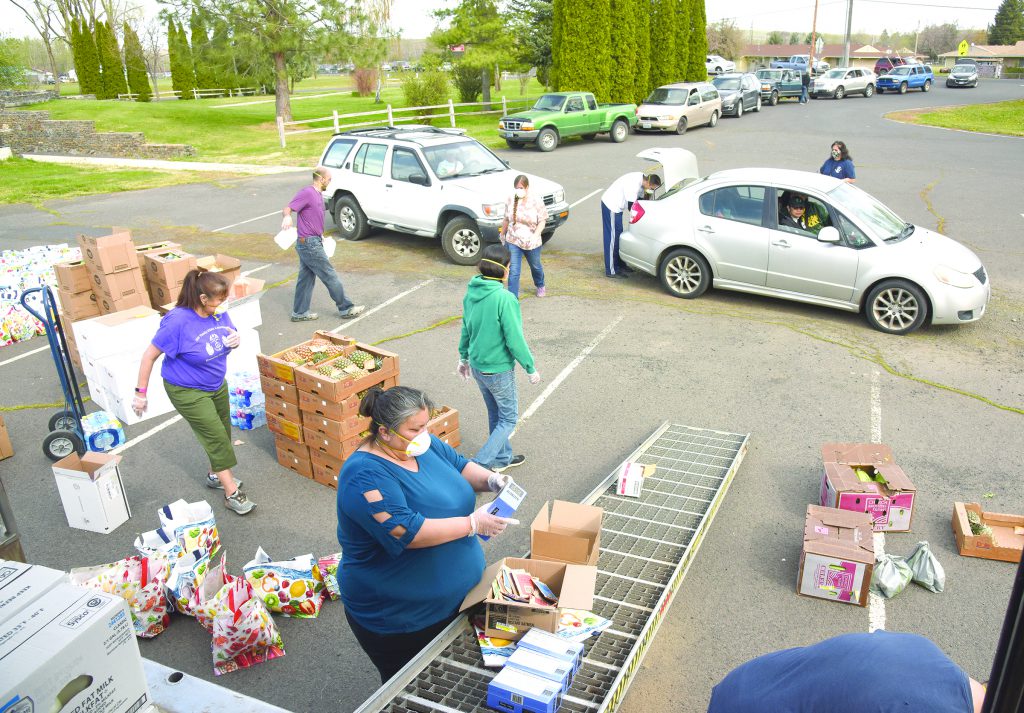 Staff from CTUIR departments and programs, as well as many volunteers, handed out food to hundreds of tribal members and others who reside on the Umatilla Indian Reservation during first-come, first-served distributions April 18 and May 1. In addition to the menu listed below, elders received hamburger patties and a half gallon of milk; families received half a roasted chicken and a chub of ground beef. Other items that were purchased or donated for the distribution included celery, a whole pineapple, sliced turkey, mixed berry yogurt, fruit mix, flour tortillas, bread, hot instant cereal and a bag of plastic resealable bags. Julie Taylor, director of the Department of Children and Family Services, who stands on the other side of the silver car, organized the event.
By the CUJ
MISSION – Nearly 200 people in cars lined up for nearly a half mile Saturday morning, April 18, to receive potatoes, onions, milk and bread, as well as other items in the first of two food distributions on the Umatilla Indian Reservation.
A second first-come, first-served distribution on May 1 drew more than 215 members of the Confederated Tribes as well as other Native Americans and community members who reside on the reservation.
Volunteers on April 18 joined staff from the Confederated Tribes’ Department of Children and Family Services who started filling bags with groceries at 8 a.m. The food distribution was advertised to start at 10 a.m., but the first car showed up about 9 to be first in line. That proved to be a good idea.
With vehicles stacking up behind the leader, Julie Taylor, DCFS Director, started the show at 9:50 and less than a half hour later the crew started rationing the supplies, reducing the number of potatoes and onions, cutting back to a single loaf of bread and one gallon of milk to make the vittles go further.
Before the hand-out ended, cars were backed up to the grassy BIA yard.
Taylor coordinated the event and kept track of the cars and families on a clip board. Kathleen Peterson and Dionne Bronson from DCFS directed the volunteers who deftly handled a variety of tasks. Volunteers loaded groceries from pallets on the pavement and from two semi-trailers, one that was refrigerated, into bags that were handed to Tribal members, other Indians, as well as families that reside within the Reservation boundaries, through van doors and car windows and into SUV trunks and pickup beds as vehicles moved slowly one-after-the-other, like the hotrods at the end of the Dress-Up Parade, across the parking lot near the former Nixyaawii Community School.
Each family or community member was allowed to pick up their own food and people were instructed to stay in their vehicles while the food was distributed. Elders were able to send a representative to obtain and sign for their households. Some vehicles had just a driver, some vans were full of adults and children.
The distribution ended about 10:45 with Kathleen Peterson sitting on the tail of a hatchback waving late-comers away.
Volunteers included KC Picard, Rylen Bronson, Tahner Bates, Lindsey Watchman, Cassie Nez, Angela Hummingbird, Emiliano Delgado, Arnold Aleck, Celeste Watchman and Frances Marsh, Mark French, Joe Ball, Pros Picard, Mike Ortiz and Terence Cowapoo.
Emile Bill and Mike Enger were there representing Wildhorse Resort & Casino, which helped with ordering and delivery of food; Brad Spencer organized the donation of onions and potatoes from AgriNorthwest Farming (Plymouth, Washington) and River Point Farms (Hermiston) with the Pendleton Church of Jesus Christ Latter Day Saints, which was represented by Bishop Gary Edwards and Elders Quorum President Matt Yoshioka. KC Picard and Rylen Bronson traveled to Hermiston to pick up a load of potatoes and onions.The COVID-19 Incident Command Team provided funding to pay for food purchased from SYSCO, which provided two semi-trailers for each distribution. Maureen and Victor Bates made breakfast burritos for all the volunteers on April 18.
At the May 1 distribution, which was followed by a fish-and-meat giveaway, staff from CTUIR departments included Taylor, Peterson, Bronson, Kola Shippentower, Natasha Herrera, Lawanda Bronson, Sam Spino and Taylor Jerome from DCFS; Tim Elliot, J’Shon Thompson and Ashley from Yellowhawk Tribal Health Center, who donated 175 masks; Chris Marsh, Marcus Conner and KC Picard from Tribal Housing; Koko Hufford, Bruce Zimmerman, and Kelly George from the Department of Economic and Community Development, who delivered a variety of foods to the distribution site and Gabe Jones from Public Works, who assisted with filling hand-sanitizer containers. Other volunteers included Tyasin Burns, Michael Ortiz, and Jill-Marie Gavin, a member of the CTUIR Board of Trustees.
Donations and delivery was made by Wildhorse Resort & Casino, SYSCO, and AgriNorthwest Farms.