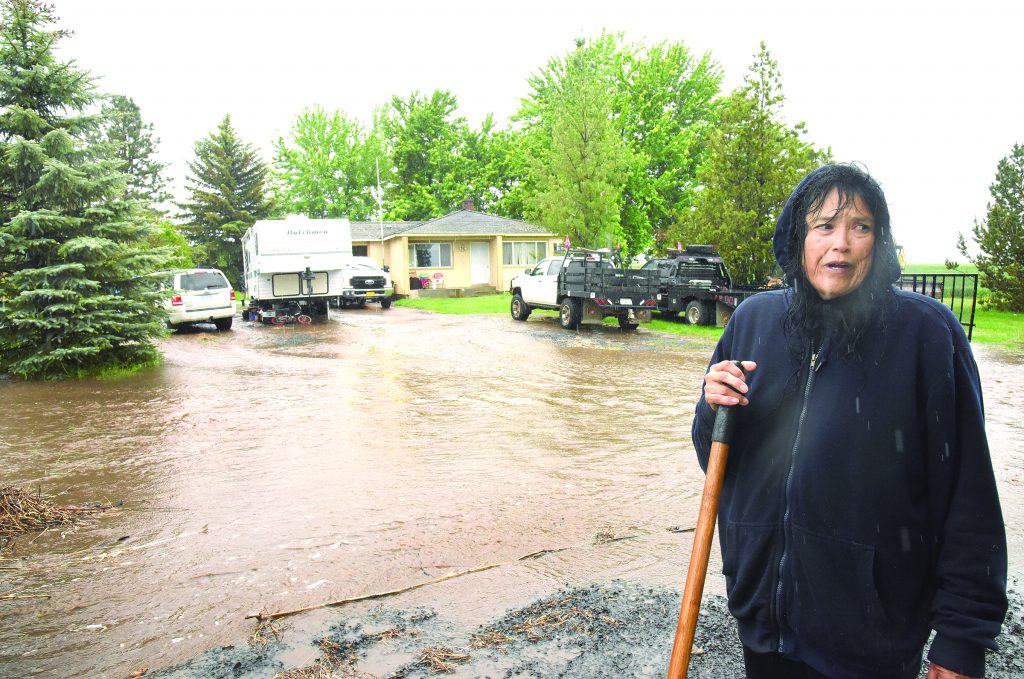 Carol Farrow stands in front of the home where she lives with her siblings on Thompson Road.

MISSION – The community mostly dodged another bullet May 20 when the skies darkened before dumping more than an inch of rain in less than 24 hours on the foothills of the Blue Mountains.

It didn’t end up anything like the February floods that caused millions of dollars’ worth of damage throughout Eastern Oregon, but for a while there was cause for concern. Weather alerts were alarming enough that employees at the Nixyaawii Governance Center (NGC) were sent home in the early afternoon.

Volunteers filled sandbags from piles near the NGC that were left over from the February floods. BOLSTER crews from the Department of Children and Family Services joined staff from the Public Works Department to place sandbags around a few houses on Shortmile Road and Thompson Road, as well as to spots along McKay Creek where streamside habitat was being washed away.

On Thompson Road, Carol Farrow was standing in the front of the house where she lives with her brothers and sisters. It was the former home of her parents, Elzie and Emma Farrow.

Leaning on a shovel, she watched as her brother and nephew, plus several men from Tribal crews, created a sandbag levee to divert water away from the house and places sandbags beside a ditch where water was pouring through the driveway.

“It was running pretty hard this morning, but maybe just a quarter depth in the ditch. And then just bam, it just went,” Farrow said.

“My sister and I have been trying to keep the culverts unclogged for probably about the last three and a half hours,” Farrow said.

“Luckily I had Kat Brigham’s (Chair of the Board of Trustees for the Confederated Tribes of the Umatilla Indian Reservation) number,” Farrow said. “I called her and told her we were having a flood over here. She was able to call and help us out finding people to get sandbags this year.”

Kevin Hudson, CTUIR Farm Enterprises manager, said the rain did nothing but help the wheat crop.