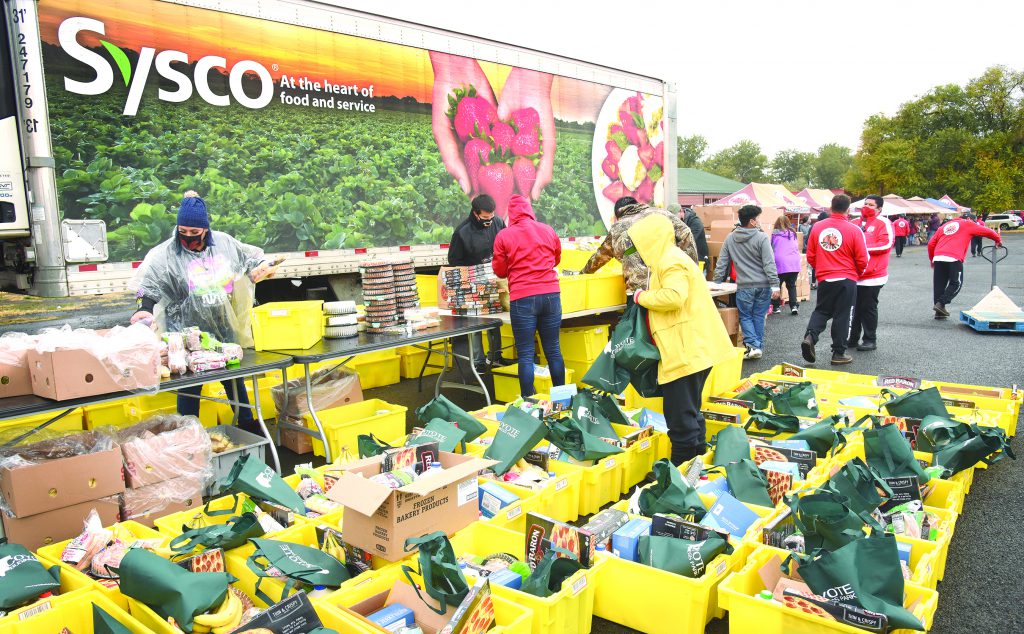 MISSION – Quanah Spencer said he came to the Umatilla Indian Reservation, where he has several relatives, to “take away despair, anxiety, and give back hope” to the Native people struggling during the COVID-19 pandemic.

Spencer, the Tribal Relations Director for BNSF Railroad Company, was one of more than 60 volunteers from around the Northwest who joined Peacekeepers Society, a Yakama-based non-profit that mobilizes families to “promote positive social change.”

On Saturday, Oct. 24, the Peacekeepers – 40 strong who arrived in a bus – were joined by volunteers from Portland to deliver food and personal protection equipment to members of the reservation community in front of the Mission Longhouse. Cars and trucks backed up to the Bureau of Indian Affairs building and waited as long as three hours to take advantage of the food giveaway.

The Peacekeepers Society, which was founded in 2015, has been delivering food and other stuff to Indian reservations around the Northwest, including the Colville, Warm Springs, Klamath Falls and Chiloquin tribes. The next stop after Mission was on the Puyallup reservation where three members of the Confederated Tribes – Shawna Gavin, Jill-Marie Gavin and Michael Ray Johnson – traveled to take part in the event.

Spencer, who was a lawyer in Seattle before going to work for BNSF – formerly known as Burlington Northern Santé Fe Railroad – was instrumental in persuading his employer to pay for the food that was donated for the CTUIR event.

“It’s all about love, all about the people,” said Spencer, who has been committed to Saturday events with Peacekeepers.

On the Umatilla Indian Reservation, Spencer said, “They love me and I love them. I’m okay saying that with all that is happening in the world. We need to love and respect each other; hell man, what’s not to love about this?”

Xuxuyay Raven, executive director for Peacekeepers, said the mission of the organizations is to change lives through mentoring and offering economic support for youth and adults. He said more than 60 families – Hispanics, tribal, non-tribal, enrolled and not enrolled – are active in the Society. Most of the Peacekeeper volunteers here were young people under the age of 30. Parents brought their children to help with the cause.

“The cool thing,” Raven said, “is besides the great need for food it’s good to see how happy people are. We travel to different places to bring in a positive spirit, hope to people who need it. Look at everybody, they’re smiling and happy.”

When they aren’t busy distributing food on the Yakama Reservation and other locations, the Peacekeepers Society provides workshops for youngsters and adults. The group is sponsored by grants and contributions from other tribes, foundations and organizations, Raven said.

“We started with a few moms and grandmothers who started bringing their grandsons and then the kids wanted to join,” said Raven, a motivational speaker who has worked with youth and adult drug-and-alcohol recovery said. “Now year after year we want do more and more.”

Raven said the Peacekeepers’ efforts would not be possible without collaboration from Portland partners, including Fires Igniting the Spirit, Snack Bloc, Don’t Shoot PDX and Symbiosis PDX.

Two of the volunteers, Midori Hirose and Barak Goodman, represented Snack Bloc and Fires Igniting the Spirit, respectively. Both have been active in the Black Lives Matter movement in Portland.

Hirose said the small group, only 14 at this point, support rallies, protests and vigils, and also have helped with other food distributions and recently helped with a telethon raising money for forest fire victims in Western Oregon.

Goodman, who also has been involved with Don’t Shoot PDX, has helped organize “mutual aid” between activist groups. He was involved early on delivering water to the Warm Springs Reservation.

A three-day Go Fund Me campaign brought in $14,000 that was used to buy a forklift for Warm Springs, a dump trailer for Yakama, and a trailer for the Colvilles.

Goodman said he felt an obligation to help on whose land he’s living.

“And we don’t take used stuff, ever,” he said. “Some kid doesn’t need your old dusty teddy bear.”
Goodman said his involvement with Black Lives Matter protests began in March, soon after the shooting of George Floyd in Minnesota.

“The first night I wore a cowboy hat and an Oakland Raider shirt. The next week I was wearing a helmet and a gas mask,” he said.
Goodman said the vandalism that goes on late at night after the peaceful gatherings is not his concern.

“I don’t break things but I’m not going to stop somebody because it’s not my right to tell somebody how to protest,” he said. “Buildings don’t breath. Spray paint on a wall is not violence. Police beating people is violence. People not having food in their fridge is violence to me.”

Also on hand, as part of a group from Washington State University, was Ermiah Butler, a 2019 graduate of Nixyaawii Community School. She and three others were handing out voting information.

Butler is president of the Native American Women’s Association at WSU.

“We support women, sharing a support system and resources through the women’s center,” said Butler, who is studying environmental science and ecosystem science.

Isabel Walker, studying animal science at WSU, is from Milton-Freewater. She was representing Alpha Pi Omega, a Native American sorority that also advocates for indigenous issues, focusing on Native American rights, as well as rights for other minorities, including the LGBTQ community.

Mostly, the Peacekeepers Society and other volunteer groups were here to provide resources, promote emotional well-being, and simply lift spirits.

Jayson Umtuch, co-founder of Fires Igniting the Spirits said, “There’s a lot of need from people right now. We want to give them help and some hope, let them know they’re not alone.” 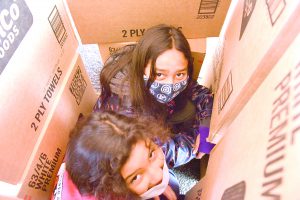 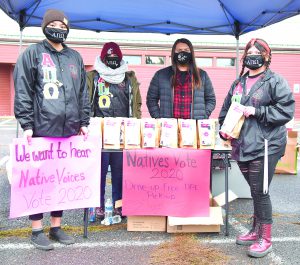 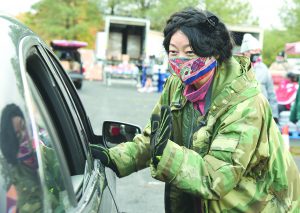 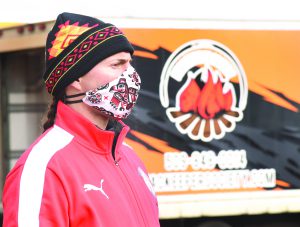 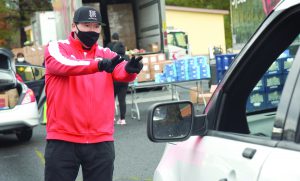 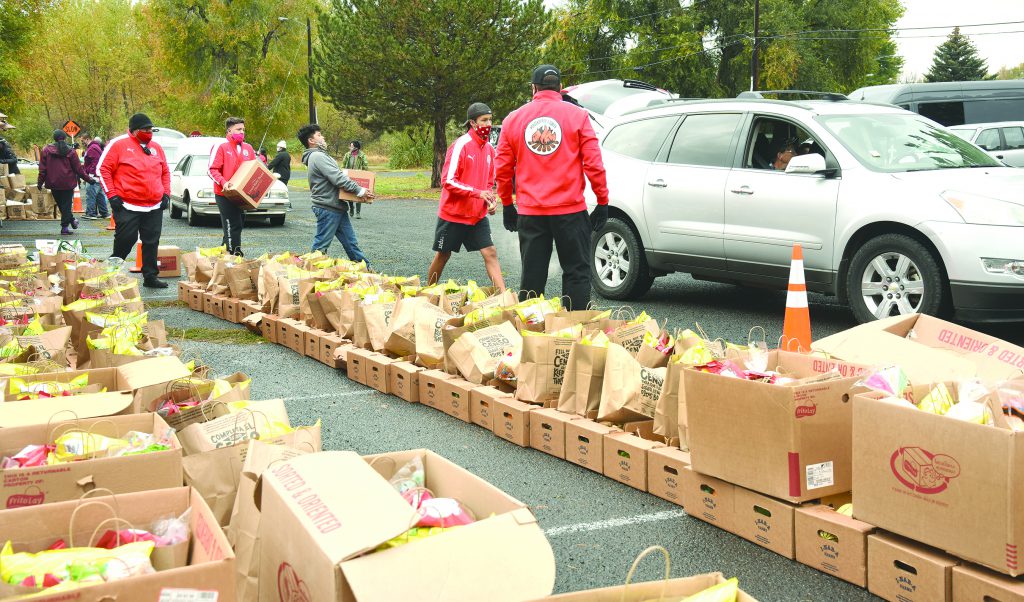