The Bearcats (1-0) edged Northern Kentucky 73-67 in overtime to earn their first win of the season. 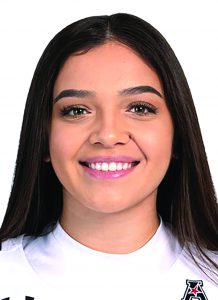 s, and had 4 turnovers. The team relied heavily on Ilmar’l Thomas, who scored 34 points in the win.

Cincinnati was set to play a familiar foe of Schimmel — Louisville — on Nov. 28, but the game was canceled. Schimmel’s sisters Shoni and Jude played for the Cardinals before playing professionally.

In late October, the Bearcats released a video interviewing and showing practice highlights of Schimmel.

“I enjoy seeing the court, shooting the ball, hustling and being competitive,” Schimmel said in the episode, titled “Fresh Faces Presented by Kroger.”

Schimmel stated, “I’ve always been around basketball all my life. My older siblings, my parents, we would always be in the gym. I was basically raised around basketball, am familiar with the game and I love it.”

Clark-Heard was an assistant at Louisville from 2007-2012, and played a role in the recruitment of Milan’s sisters, Shoni and Jude Schimmel.

The video can be seen at http://www.GoBearcats.com.