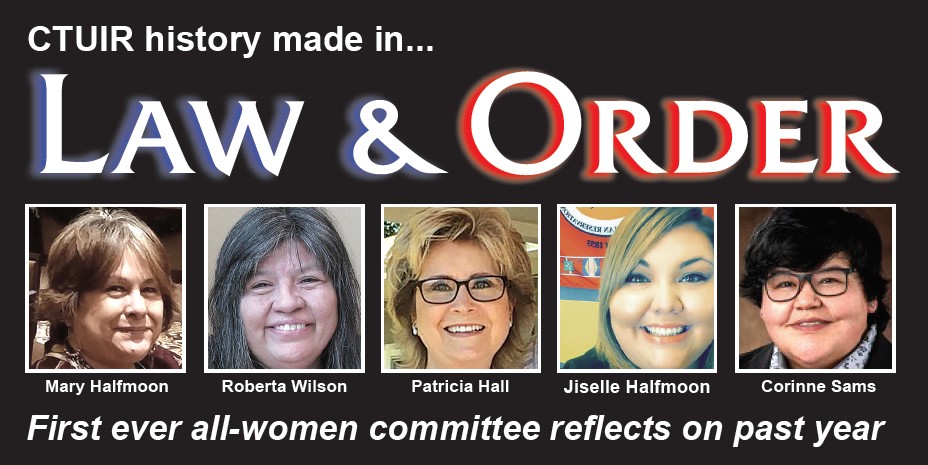 MISSION – The year 2020 was historic for a number of reasons. But here on the Umatilla Indian Reservation, the all-women Law and Order Committee was regarded as a first.

If you know Indian women, we don’t sit back idly when we hear of injustice or inequity,” Sams said. “We really stand up for what we believe in.”

“That many women are pretty no-nonsense and that quality is reflected in things getting done!” Wilson said. “I am happy to say we have worked on issues that show that the peoples’ best interests have been at the forefront of committee actions.”

“We’re all about trying to make this a safer place for all of our community,” Hall said. “We all get along great, I love that. Everyone kind of brings a little bit of their own personal experience to the committee, so that works very well. It’s been a real pleasure to work with all these women because they’re very intelligent women and they care very much about our Tribe and our community.”

“We all have a common cause: and that’s protect the community and to see that the laws are enforced,” Mary Halfmoon said. “But we all have our different opinions but we’ve been learning to listen and compromise as needed. The dynamics is you have all five strong women with strong opinions and you have to learn to work together for the betterment of the community and the tribe itself.”

Sams, who’s on the CTUIR Board of Trustees, said there was a powerful synergy and camaraderie among the group.

“I think we check our egos at the door, we value each others’ input,” she said. “We’re always striving to find a positive solution and advancement for each department we provide input to and eventually to the Board of Trustees.

One area the group believes it excelled is communication.

“I think I appreciate that there’s a lot more communication and sharing of information,” she said. “And I guess that comes from my experience. A long time ago I was Secretary for General Council and it was all men. I would say that would be the difference so far.”

“We still have a lot of issues to work through,” Mary Halfmoon said. “What I’ve seen is (with this group) there seems to be more open communication.”

“It’s quite extensive,” Sams said of the Tribal departments their committee oversees. “The benefit (of having a Law and Order Committee) is that, as tribal members, historically we haven’t always found equity in our law enforcement and sometimes our judicial system. And by having a due process and oversight of those by a committee that’s maintained of tribal members and one board member we can provide input and ensure that our community is safe and that the police officers are safe and that the community and tribal members feel that equity when it comes to the services we provide.”

Jiselle Halfmoon said the Law and Order Committee has a willingness to question things, in a good way. One big issue the Committee has worked on is the trust between law enforcement and the community.

“Right now, there’s not a whole lot of trust between law enforcement and the community and that’s one thing we’re trying to address — working with both sides to find middle ground, if possible,” Mary Halfmoon said. “It’s a hard thing to represent: Be a representative of the community and at the same time uphold Law and Order within the reservation with the departments that report to us. It’s a fine line.”

She added they are trying to catch the CTUIR up with the real world.

“The latest is body cameras and car cameras for the officers, so they have those recorded,” Halfmoon added. “When you think about in a real world, the non-Native law enforcement officers in the big cities, they wear their body-cameras. We’re still trying to catch up and slowly are.

“We have to fight for everything we need to be able to do the job to protect the community. And that’s one reason I’m on (the committee): I want to keep that fight going and protect our people and the people that live within the community and are intermarried or not.”

The challenge during their historic tenure was gathering for their monthly meeting. The pandemic did not allow them to gather in person, so they were initially done with phone calls. Soon, they hope to move to Microsoft Teams.

“It’s been a real adjustment: Not being able to meet in person,” Hall said. “It’s been challenging. We’ve been doing all of our meetings over a conference call and we’re in the process of trying to switch over to Teams so we can actually see each other.”

The responsibility of being a part of the Law and Order Committee is a great honor to those who serve.

“I’ve served on other committees with the Tribe and outside of the Tribe and I feel that the Tribe does so much for me,” Hall said. “And I feel thankful that this is a way that I can give back. And also, I love the Law and Order Committee that we’re all about trying to make this a safer better place for all of our community. I guess I just feel honored of being a part of the process of doing that.”

“I wanted to serve on any one of my committees to just kind of give back in a sense or be active in tribal government,” Jiselle Halfmoon said. “Law and Order was one of the few available ones when I signed up. Growing up as a kid, I grew up on the opposite end of the spectrum as a troubled youth. So being on the other side of the coin these days is pretty cool.”

“I am really proud to be working with these women,” Mary Halfmoon said, “because one goal we all have is the betterment of the community. And that’s a pretty cool thing to be a part of.”
Sams said she thinks there has been a national and local shift toward the acceptance of women in positions of power.

“Women have had to prove themselves over a long period of time,” she said. “Not to take away from any of the previous Law and Order Commissions that were all men, but we bring a balance into a commission that was once dominated by men. And we’re natural caregivers and we have taken care of individuals in our committee that have been that listening ear.”

Wilson’s seat expired on Jan. 7. The vacant seat was filled by Lorena Thompson. Wilson reflected on her time in the committee in a Jan. 14 email to the CUJ.

“First, I believe the CTUIR has come a long way in providing law enforcement and protections for our community,” she said. “However, I have witnessed a lot of disparities, harassment of tribal members and other injustices within the current system. I wanted to be part of a team that addresses these issues head on and allows tribal members to feel safe and protected. All tribal members deserve to be treated equally and fairly and have confidence that justice will prevail.”

The Law and Order Committee reorganized on Feb. 2. Hall and Sams remained Chair and Vice-Chair, respectively, while Jiselle Halfmoon became the new secretary.