MORE THAN 134,000 spring Chinook salmon smolt were trucked from the Lookingglass Hatchery in Elgin to four raceways on Catherine Creek (Saxsaaxinma) in March.

The setting includes fresh creek water pumped by an Isuzu diesel generator into the east end of each pond. It drains continually out the west side through standpipes covered with wire mesh.

We acclimate the fish to reduce stress to the smell and the magnetic energy and the unknowns of these waters. We feed them, watch them bulk up and color up over the course of a month, prep them for their lengthy journey of about 667 river miles. It starts at Catherine Creek, then the Grande Ronde River, the Snake River, the Columbia River, and the Pacific Ocean.

Hopefully, they’ll be back in one to three years.

The salmon are fun to watch. In some ways, they behave kind of like people. They hang out in groups.There are occasional loners.

In the morning — with the water temperature in the mid-30’s — they stay low.

The shadow of a turkey vulture or a red tail can spook them. But not my shadow.

I watch out for the seldom seen min that likes to dine in and stash a few smolt under raceway No. 1 for later consumption.My first year I saw one about to dive in. I yelled, “You’re not gonna eat MY fish,” and promptly fell chasing the critter.

My jeans and knees met steel grating walkway, and shredded.

When the water warms to the 40’s, the salmon jump at insects or just sky. In mid-afternoon, some pop up by the gushing in-pipes.

Practice for waterfalls? And of course they follow the feeder, who talks to them and praises them and urges them to grow big and strong, boys and girls, for their trip to the Columbia mouth, then beyond.

They wheel and wheel again as one school meets another head-on and merge as the food is pitched. Sometimes they don’t seem quite satisfied.

Some smolt gravitate to the west end near the sucking meshed standpipes. Some die there. Most are pinheads but not all. The law of the survival of the fittest or a genetic malfunction or an individual sickness claims them. I am a little sad as I collect the mortalities for later analysis.

A few fish swim upside down or sideways, silver bottoms up. I know they will not live, but I won’t be the agent of their death. Let them die in their own way.

IT IS NEAR the end of April, time to open the raceways and free the salmon into Catherine Creek.

And the same prayers for return, whichever are left. Where there used to be millions, then thousands, now there are barely hundreds with their wild fellow returnees.

The land used to be part made of them at the end of their journey.

Could you or I endure such travels? 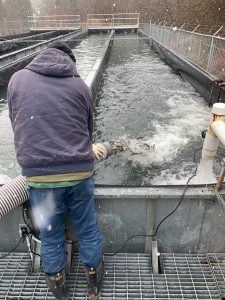