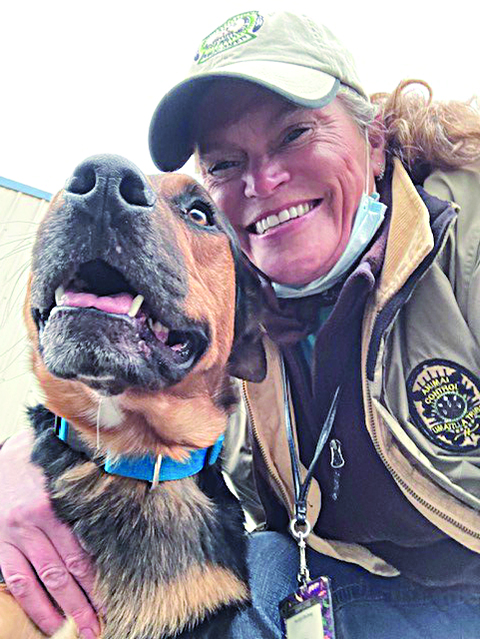 ABOVE: Kendyl DeJong smiles with Achilles, a dog that was surrendered to animal control and will be placed with PAWS for adoption. BELOW: A skunk walks into a trap that was setup to catch two kittens and their mom.

By Miranda Vega Rector of the CUJ

MISSION – With five years of experience being the Animal Control Officer for the CTUIR, Kendyl DeJong has acquired quite the collection of stories from a kitten riding a semi-truck’s transmission for 279 miles to accidentally trapping a skunk.
“Every day the calls come in and I never know what is going to be next,” DeJong said.
Growing up in Prairie City, Ore. in an old school house with a barn on 42 acres of land, DeJong was introduced to wildlife and pets at an early age. She recounted in a letter how the original owner of the land was a cattle thief named Mel Kelly.
“He would steal people’s cattle as they came off Dixie Mountain, lead them into the big barn on the property, change their brand, and off to the market they would go!” she said. “He went to prison for his actions.”
DeJong said that the ranch became her playground for animals starting with feral cats hiding in the sheds. Next she got a horse and over the years they acquired sheep, chickens, goats, cows, and more horses. She would also find wounded animals and often bring them home to her dad so he could help mend them or bury them.
“Little did I know my compassion for animals would come back later in life,” she said.
While in junior high, DeJong befriended a family that was from Umatilla Indian Reservation and for 40 years became like a second family to her. Eventually they invited her to move to the area. That’s when she decided to apply for the CTUIR Animal Control Officer position.
Dejong has completed training in National Animal Care and Control and with Animal Control Officers from Walla Walla and La Grande. In addition, she has completed 80 accredited college hours through the National Animal Control Association (NACA), which is a division of Colorado State University. She has continued her college credits through Justice Clearing House provided by NACA and the Sheriff’s Department. Most recently she took a webinar about releasing wildlife, which came in handy when she accidentally captured her first skunk in a live trap.
“I was trying to trap two feral kittens and a mom cat who had been looking for food in people’s garbages,” said DeJong. But coincidentally, she captured a skunk and then had to release it. “The teacher said stay low, slow, don’t cast a shadow, and talk softly. Well, it worked and the skunk was so comfortable it wanted to go back into the trap.”
She told a story of a kitten that rode on a semi-trucks transmission from Grande Ronde to Mission, a 279 mile drive.
“How that kitten could hang on with the kitty hearing the engine roar in that heat must have been horrible,” she said.
Another story was when a resident was missing a little puppy with a batman t-shirt. DeJong asked a mailman to be on the lookout and sure enough he found the puppy, still with the batman shirt on and his leash wedged between two rocks. The puppy had been stuck there for a week.
“My favorite part of this job is helping people find lost pets and trapping cats with my dear friend Rodney Miller who works for Cat Utopia. The trap neuter program is very important to prevent homeless pets and keep our mousers around,” said DeJong.
In addition, DeJong said that PAWS Animal Shelter has a low cost spay and neuter program through a veterinary clinic called Prevent Homeless Pets located in Benton City, Wash.
“Remember folks, spay and neuter your pet and please reach out if you see any wandering dogs on the back roads,” said DeJong.