The CTUIR Department of Natural Resources utilized a Whooshh Innovations, Inc. fish passage technique at Nursery Bridge Dam on the Walla Walla River in June.
“The purpose is to safely move trapped spring Chinook from the sorting area up top to a transport truck,” Jon Lovrak, Project Leader for Hatchery Facilities, said.
Fish were elevated 25 feet from a sorting area to a transport truck using the Whooshh system.
“Spring Chinook trapping and Whooshh-passage began on May 21 and 10 fish were loaded onto a truck and transported to Walla Walla Hatchery to be used as brood-stock,” Lovrak said. “Whooshh operations were successful.”
CTUIR Board of Trustees Vice Chair Jeremy Wolf was excited about the project, which highlighted fish passage in early June.
“The Whooshh implementation aides the survivability of the adults because it minimizes handling over a bad passage structure where survivability is further complicated by low flows and high temps,” he said.
In mid-June, the project halted due to a significant drop in river flows, which prohibited them from operating the trap.
“We weren’t seeing any spring Chinook .adults come through,” Lovrak said. 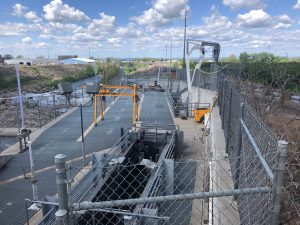 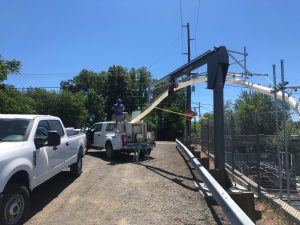