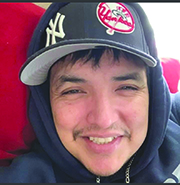 Christopher Reuben Selam Sr. was called home to the Lord on August 19, 2021. He was born on August 1, 1983 to Terry A Selam and Verona J Miller.
He enjoyed playing softball. He played for the Lil Devils and The Shockers team. He enjoyed watching his favorite baseball team, the New York Yankees. He came to know the Lord in 2011 and his faith grew strong and he loved the Lord and loved sharing the gospel with everyone. He always wanted his family to come to know the Lord. He loved all 10 of his children, his family and everyone he came in contact with. His career was an assistant manager at kfc and every customer that came to know him had nothing but great things to say about him. He was well known in his community. . He attended Living Word Chistian Center in Pendleton OR. he loved his Pastor Sharon Miller and the whole congregation. He touched many lives for he was caring and loving. He enjoyed music very much, he enjoyed family trips to wallowa lake,he was a coach for his daughter and sons basketball teams, in the beginning of his walk with the Lord he was a youth leader for his church Parkrose tabernacle.
He was an amazing, loving, father, husband, son, nephew, brother, friend. He was a father figure to those who did not have a father in their lives. He was acknowledged and loved by those lives he touched and the first thing you would notice about him was his big bright beautiful smile.
he is preceded in death by His Father terry selam, father keith miller, grandmother delsie selam, grandfather howard selam, grandfather jason umtuch, grandfather ross george, uncle lindsay selam, and brother william “billy” gardipee.
he is survived by his wife brooke selam of pendleton OR, mother verona miller of wapato wa, children sydell wilson-selam, dimitri wison, joshua selam, zelma selam, christopher selam jr of pendleton OR. cesilee meninick, alvina meninick, quinny meninick, terry meninick of toppenish wa. keon wilson of lapwai id. and nephew tahkeome andrews of wapato wa, and niece cynthia umtuch of toppenish wa. his brother dimitri minthorn,and in laws scott minthorn and vivan sohappy of Pendleton OR, many aunts, uncles, cousins, nieces and nephews.