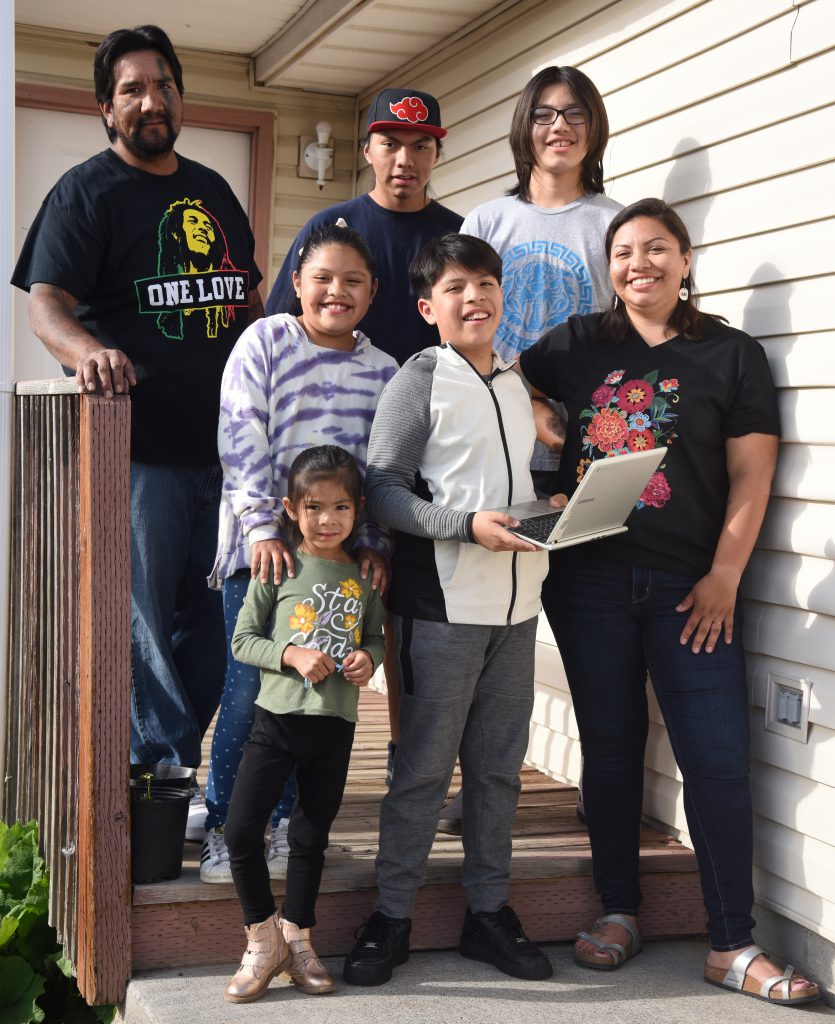 Talia Tewawina, bottom right, is a warrior mom, keeping her five children on track during the COVID-19 pandemic with a daily schedule that includes schoolwork, chores, exercise and freetime while she works a part-time job at Yellowhawk Tribal Health Center on the Umatilla Indian Reservation. The family, which lives in Pendleton, includes husband Andrew, plus the children, Midnight Rose Tewawina at the bottom, Ayanna and Ayden Star in the middle next to their mother, and Anthony and Leo Crawford on the top step.

Does she sometimes feel cooped up with all those boys?

“Sometimes my sister and I grab our bikes and go down the hill,” she said.

And if truth be told, she bosses Ayden around.
Midnight Rose Tewawina is 4. Her mom said she listens to Leo and Anthony, but she gets perturbed with Ayden and Ayanna. Talia said her older siblings baby Midnight Rose and often pick up after her. The youngest child has recently started using Ignite, an interactive touch-screen learning program.
“She thinks it’s a game,” Talia said. “She counts items and touches words in a sentence. The other day I heard her saying ‘I don’t know how to read the word ‘the’. She had on headphones and was yelling at the tablet ‘What is the word the?’ She’s learning. It pulls apart her name and asks her to touch the upper case M or R. If she gets it right she gets to dress her icon person. She earns shoes, sunglasses, different color hair for her little person by touching the correct letters. On the first day she had more than 300 items for her little person. Now she has outfits and 200 pair of shoes.”
After a month, things are rolling along well in the Tewawina, Crawford and Star house. (Talia’s husband Andrew Tewawina works through TERO for Gage It Construction.)
“It feels like everybody is tuned in,” Talia said.
However, the youngest children don’t always understand social distancing.
“I tell them they can’t go to their friends on the weekends and they say ‘What’s the big deal?’ I had to sit them down a couple of times and tell them this is serious, it’s a real thing,” she said.
But the family is following the rules, learning from a distance, and waiting for COVID-19 to run its course.
“We’re just in the groove of things and it’s going well. We’re doing what’s supposed to be done.”