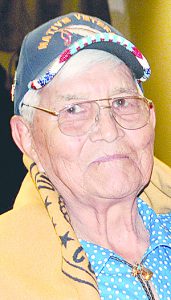 James C. Penney,”wit-sy-ky-kun,” an enrolled member and life-long resident of the Umatilla Indian Reservation, left this earth of natural causes at the age of 94 on June 29, 2020 in his home.

He was born in a tipi on Jan 29, 1926 in Thornhollow, Oregon to Hiuse (Annie George) and Heyumetelekartset (George Penney).

“J.C.” joined the US Navy at the age of 17 and served in the Pacific Theatre during WWII aboard the aircraft-carrier USS Casablanca.

After earning service and combat medals and an Honorable Discharge, he returned home to the Umatilla Indian Reservation and became an active, life-long member of the George St. Denis American Legion Post 140, where he was well-respected by his fellow veterans.

Local jobs consisted of Harris Pine lumber mill, a firefighter with the Umatilla Agency BIA, and one of Yellowhawk’s earliest A&D Counselors. He was an Indian-preneur, who managed his own business ‘Penney Reforestation.’

An annual participant of Round-Up & Happy Canyon (carried in as a baby), he lived in the tipi village, danced in the arena, and rode his horse through many parades (and a few taverns too!).

JC was an outstanding athlete. He played football, basketball and baseball for the infamous Mission Indians and competed in golf and bowling tournaments all across the west. Hobbies include hunting, fishing, wood-cutting, camping, fantasy sports, and gambling … he was even in three movies: Pillars of the Sky, Sioux Uprising and Paint your Wagon.

To say the least, JC was well-known, admired and loved by hundreds of family and friends, near and afar.