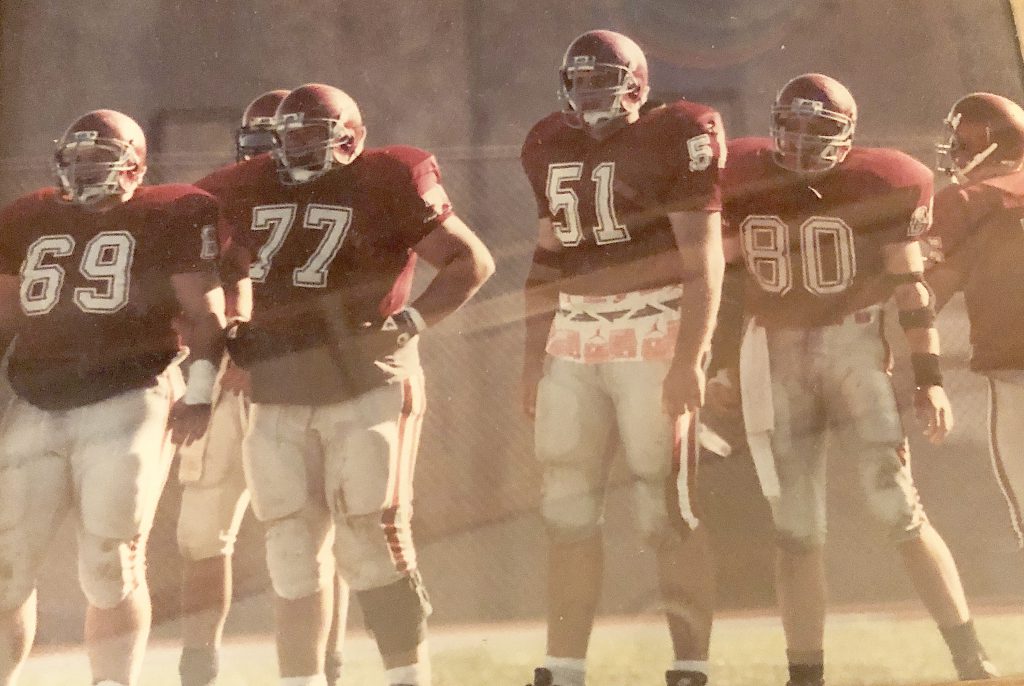 By Brandon Hansen, for the CUJ 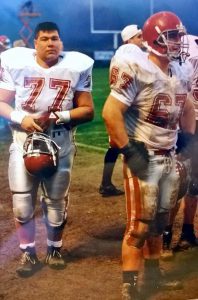 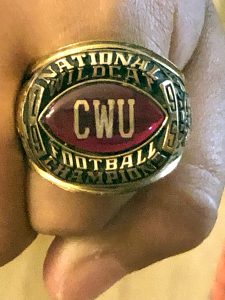 Shawn John’s Wapato High School football team had one winning season.
But his college career for Central Washington was legendary.
“It was a dream come true,” John said. “I never imagined that would happen. The thrill of hitting people while playing for a university that wanted me to play for them. It was five years of grit. I was proud of where I come from and all the help my coaches, parents, grandparents and family members gave me.”
The Confederated Tribes of the Umatilla Indian Reservation member is in the lineage of chief Jim Kanine, and his grandparents are the late Anthony and Lillian Hoptowit. His dad, Lehigh John Sr. and his late mother Sharon Hoptowit John played a big part in his upbringing and getting him into sports. This would eventually turn into a playing and coaching career with John being named an All-American lineman and part of a national champion football team.
“My dad really engaged all of us children into sports and instilled discipline and hard work,” John said. “I owe a lot to my dad. He is the one that made me wrestle in the winter time when I was cut from basketball.”
John would go on to be a two-time state participant in wrestling for Wapato. This in turn allowed him to become one of the best blockers Wapato had seen. He lettered all four years in football, was named to the first team all-league offensive line and was an alternate in the East-West all-star game. While a knee injury hobbled him his junior year, he turned enough heads at Central to get him a spot on the Wildcat football roster.
“My advice to younger generations, especially my Native American kids, if you have a talent stick with it and get stronger at it,” John said. “It doesn’t have to be sports – it can be math, English, reading, technology, cars – but whatever you’re talented at, build on it. Go to college or a trade school. Get good grades and keep when up when you’re in college.”
Playing in the NAIA, the Wildcats were a finely tuned program. John was about 250 pounds in high school but the CWU weight training program got him up to 300 pounds, while also working on conditioning, sprinting and even a yoga class. John said the linemen first balked at first to the thought of the yoga class but then found out it helped with hip reflexes. Once you get into college it’s a 24/7 job with nutrition, spring ball, winter ball, weight lifting, recovery and then studying for school.
“Central in those days was pretty awesome, the coaches and administrators probably still call it the glory days,” John said. “You also have to get a degree, you’re a student athlete and they really pound that and they pound that today.”
John played for Mike Dunbar and later coach Jeff Zenisek. The wins came way more often than losses. While the Wapato grad red-shirted the 1989 season and then played 1990-1993 and would end up blocking for future NFL quarterback John Kitna.
“It’s a different level and that’s what I really liked about it,” John said. “You had a whole team of athletes going for the same mission of ultimately being national champs.”
During his senior season, Central Washington led the team in total offense with 515 yards per game. He would be named the best blocker by the team, earn all-conference, all-region and honorable mention all-American honors. He was later introduced as a member of the 1995 team into the Central Washington Hall of Fame.
After graduating with a leisure services degree from CWU in 1994, he began pursuing his teaching certificate and joined the CWU staff as a grad assistant. In 1995 he was part of the team that won the 1995 NAIA national title, getting a national title ring out of the deal.
“On the sidelines you’re totally focused on what is going on, evaluating film on everything including seven-on-seven drills,” John said. “As far as the coaching staff, we were very structured.”
In his second and third year, John served as a running back coach for the team. While John admits he loves being with the linemen, he worked on the finer things with the ball carriers including false steps, knowing where your linemen are blocking so you can help them out and blitz pickup.
“I showed them how to pick up a blitzing linebacker, since defensive schemes can be complicated we scouted the opposing team and then attacked their plan,” John said.
After graduating, he got a job teaching and coaching for Wapato where he would stay for 18 years. He helped the football team for five years, including two years. The birth of his son, Chaska, caused him to focus more on family with his wife Lisa. Once Chaska was older, he began coaching Grid Kids and breaking down the fundamentals of the sport.
John then took a job coaching and teaching at West Valley in Yakima and he’s been on the football team staff for the past four years. Chaska is now playing for the University of Puget Sound and John’s other son, Jason, is old enough now to begin playing Grid Kids.
He said he does feel the pounding his body took while playing college football, but said that he has lived a good life because of athletics. He said he continues to be both a leader and a traditional tribal dancer.
“Part of my personality is being loyal and giving back to the community,” John said. “I really just try to be better today than I was yesterday and have really taken that to heart. Football for me was just a great dream and I’m proud I accomplished that.”