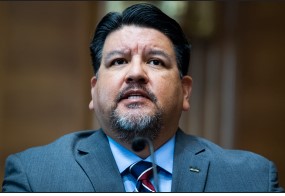 WASHINGTON, D.C. – CTUIR member Chuck Sams continued on his trek to make history as the first Native American to serve as National Park Service Director Nov. 2, as his nomination unanimously moved forward in the Senate Energy and Natural Resources Committee.

One last step awaits: Approval by the Senate.

Sen. Ron Wyden (D-OR) led a small wave of positive praise that none of the other six candidates received.

“First, I want to thank Sen. Barrasso (R-WY) and Sen. Manchin (D-WV) for moving Mr. Sams. This is an American who we’re going to be proud of in terms of service on Parks. A lot of my colleagues met with him and talked with him; I very much appreciate his consideration today. I hope all colleagues will support him. I think he is going to make us proud of what he does at the Park Service.”

Sen. Maria Cantwell (D-WA) said, “historic moment for someone from the Pacific Northwest … And our Park Service having been vacant for a long period of time is desperately in need of the leadership that I think Mr. Sams can provide us. Very excited he is moving to the Senate floor and that this level of diversity and focus on Interior issues; continued leadership in the Dept. of the Interior about our first stewards of the lands — Native Americans — so I’m glad to see that diversity integrated into the leadership.

Sen. Steve Daines (R-MT) said “I too share the support for Mr. Sams for the National Parks leader. If we pass the Great American Outdoors Act we have a wonderful opportunity now to move forward with implementation of addressing that maintenance backlog. … I’m glad to see we got this done as a committee.

(Sams) filled that position. There’s a lot of great work to be done and he’s the right guy to do it.”

Sams was one of five nominees to move forward unanimously.
During his Oct. 19 confirmation hearing, Sams stated there is an urgent need to address staffing shortfalls within the NPS.

“The National Park Service cannot achieve its mission without a well-supported workforce, and I am committed to focusing on the caretakers of this mission,” he said. “Staffing, housing, and other issues are impacting morale and deserve our active attention.”

Permanent employees have declined 6 percent over the past decade, while attendance at national parks is up dramatically.
Sams also said he would emphasize tribal outreach as director.

“In Indian Country, we expect an open discussion with the federal government prior to making a decision, not after the fact,” he said. “If confirmed, I will bring this spirit of consultation to my service as Director. I look forward to consulting with neighboring communities, stakeholders, local, state and Tribal governments, and Members of Congress, even when the conversations and topics are challenging.”

“Convince me that you’re ready to take on this challenge having had no experience as a park ranger, or a park manager, or otherwise involved in the National Park Service,” he said.

“For the last decade, I’ve been part of the executive management team in managing one of our original reserves, a reservation, the Umatilla Indian Reservation which is an over 190,000-acre reservation, along with the 6 million-acres of land co-managing with local, state and federal officials,” he said. “And that includes National Parks, Park lands and other resources. And over my career I’ve actually worked in National Parks, mostly with volunteers in eradicating invasive species, cleaning up, and doing preservation work, in addition to providing additional lands to National Parks. When I was with the Trust of Public Land, we donated land to National Parks for visitation.

“And,” he added, “over the last decade I’ve worked very closely in my home state on a number of initiatives on Oregon’s outdoor initiative and parks initiative, helping the state director figure out how we do traditional, ecological knowledge.”

“With Chuck Sams earning committee approval, the @NatlParkService is one step closer to having the director it needs & our country deserves to protect our parks’ natural & cultural resources. Chuck represents the best of Oregon. I urge the Senate to move quickly to #ConfirmSams,” he wrote.

Back home on the Umatilla Indian Reservation, Board of Trustees Chair Kat Brigham congratulated Sams for the historic approval.

“Tribal elders have been preparing Chuck for this type of work his entire life,” said Brigham. “From a young age, he learned he has a responsibility to take care of the land for our children’s children.”

If selected, Sams would be responsible for more than 22,000 employees and 222,000 volunteers at National Park units in every state which generate nearly $40 billion for the national economy.

The National Park Service is a bureau of the Department of the Interior, which is led by Secretary Deb Haaland, a member of the Pueblo of Laguna. She made history when she was confirmed as the first Native American cabinet secretary in March.

Jonathan Jarvis was the last permanent NPS director confirmed to the position back in October 2009. He served for the remainder of the Obama presidency.