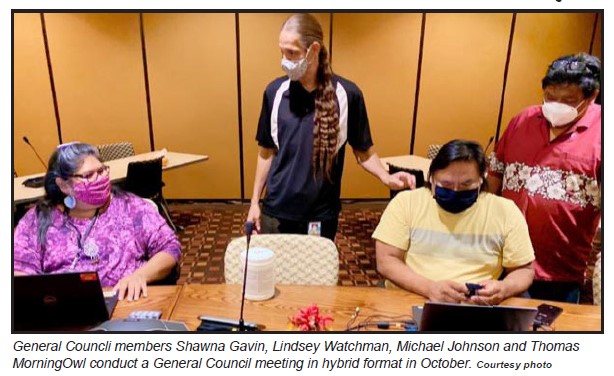 “Funny, they all sat in the back of the room,” General Council Chair Lindsey Watchman said, “except to come to the front table, for the microphone to ask questions. … The majority of in-person attendees were elders.”

Maximum seating in General Council chambers was 30. Counting the personnel and General Council, that number reached 28, according to Watchman. Many Board of Trustee members stayed in their offices to ensure seating was available to Tribal members.

General Council has been trying to provide the hybrid format since late 2020, Watchman said. But because Nixyaawii Governance Center had limited access, it wasn’t possible until now.

The numbers were promising compared to before the pandemic, when average in-person attendance was 74.

And they’re finding that the hybrid format is allowing more off-reservation Tribal members to have their voice represented at the table.

“Being able to serve both on and off reservation General Council members, using both our traditional chambers and format — as well as incorporating evolving technology, like Zoom — are primary objectives of the Office of General Council – Communications Plan,” Watchman said. “This, too, is why we developed a social media presence on Facebook, and established an email distribution list.”

“Zoom,” Watchman added, “is an opportunity that the General Council has found to be valuable in engaging off reservation tribal members. We have altogether taken the time and patience, to learn this new communication tool. Now that we have it figured out, all future meetings will be held in this format. We have effectively removed a barrier, for fuller participation in our tribal government.”

General Council Secretary Shawna Gavin said the hybrid meetings were a goal to be able to offer prior to the pandemic. So when it hit, and the technology was forced into use, it was a positive. But not every CTUIR member has ability to use or access to a computer, so General Council attendance waned in that sense.

“Tribal members have been frustrated, many of them look forward to the meeting each month,” Gavin said. “It’s a chance to greet each other, grab a quick snack together, then catch up on tribal affairs via departmental reports; committee/commission reports – many of which are required via their code to report to General Council annually; finance and Board of Trustees individual reports.”

“This past term has been a challenge,” Gavin added, “but with every challenge is an opportunity to grow and stretch what ‘we used to do’ against ‘okay let’s do something new.’ General Council officers have long dreamt of being able to offer off-reservation G.C. members an opportunity to listen to reports, offer their input and exchange ideas. Although COVID-19 hit the CTUIR in a hard and profound way, it’s been good to know that each month on the third Thursday, we would gather for a meeting.”

Gavin said it was a blessing to see those who made the first hybrid meeting in-person. “We look forward, as vaccinations and surges decrease, to holding more and being able to include more,” she said. “That being said, hybrid meetings are a good option in my opinion, so that those without childcare, transportation or from afar, can join the General Council meeting each month. Many thanks to the Information Technology Department (IT) and Public Works who provided the necessary assistance to do this.”